BANGKOK - Thai police have charged a suspect involved in a gang shoot-out at a popular shopping district in Bangkok that left an Indian tourist dead, the Bangkok Post reported.

He said the 28-year-old, also known as Tam Tuekdaeng, confessed to being one of the shooters in the incident on Sunday night that took place at a carpark behind the Watergate Pavilion mall in central Pratunam.

The area is frequented by tourists and known for its cheap shopping and night markets.

Police Major-General Katcha said the shootout was the result of a dispute between rival gangs.

Police had said on Monday, citing witnesses, that the skirmish began after three young men armed with rifles first opened fire at a snooker parlour.

That prompted a group of about 20 men - who were also armed with pistols, knives and sticks - to run out from the snooker parlour onto the street where the first group had opened fire.

Preecha was the supervisor of the snooker club which was newly opened.

A group of Indian tourists leaving a nearby restaurant to head back to their tour bus were caught in the gunfire.

The Nation newspaper has identified the Indian national who was killed as Gakhrejr Dheeraj. The 42-year-old died in hospital. 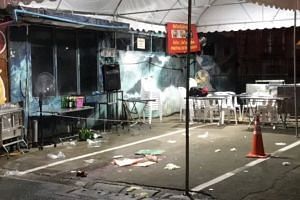 Four others were injured in the incident. They included Indian tourist Sharma Dharmendra, 45, and 28-year-old Laotian tourist, Keovongsa Thonekeo.

Police are applying for court warrants to arrest five other suspects involved in the shooting, Police Maj-Gen Katcha said.