The deadly skirmish occurred on Sunday on a street behind the Centara Watergate Pavillion Hotel in central Bangkok’s Pratunam district. The  district is a tourist-friendly area known for its cheap shopping and night markets.

Police spokesman Colonel Krissana Pattanacharoen said in a press statement several teenagers “had an argument, and started shooting in a small alley near a Bangkok mall”.

There was a group of Indian tourists waiting for a tour bus nearby when gunfire broke out.  “Police are still hunting for the group of teenagers,” the statement said.

A health official from Bangkok’s Erawan Centre – the dispatch centre for the city’s emergency medical services – told AFP that one Indian tourist died, and that four others were injured.

“One is a Lao who was admitted to the police hospital who is still alive,” the hospital official said.

Police said that Gakhrejr Dheeraj, a 42-year-old Indian national, died in hospital. Police earlier said Keovongsa Thonekeo, 28, who it identified as the Lao tourist, had also died in hospital. It later said the tourist survived.

The Nation reported Police Major General Senit Samararn Samruajkit as saying that three young men armed with rifles opened fire at their rivals following a dispute at a nearby snooker parlour.

He cited witnesses as saying that some 20 young men armed with pistols, knives and sticks then ran from the snooker parlour into the street, where the three men carrying rifles opened fire. 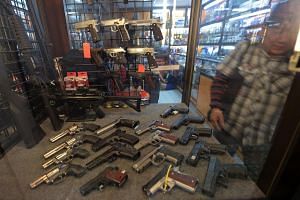 A bullet, a body: Thailand's troubling gun culture results in soaring rate of murder by firearms

Mr Senit said police have yet to investigate the type of rifles used, but spent shells from an AK-47 assault rifle were found at the scene.

Tour guide Juli Sawang-aroon, 62, said the injured Indians belong to a group of Indian tourists taken by coach to dine at the India Gate restaurant on the ground floor of the shopping mall.

The area is also home to many tourist shopping hot spots like Platinum Fashion Mall and Pratunam Market.

After the dinner, the tourists were given some time for shopping before the coach took them back to their hotel. Those who had finished their shopping returned to the carpark on the street to wait for their coach.

Mr Senit said the rival gangs are believed to be made up of youngsters in the area.

The police have launched investigation into the rare street fight with the use of war weapons in Bangkok.