BANGKOK (AFP) - A graft probe into the luxury watch collection of Thailand's junta No. 2 was dropped on Thursday (Dec 27), sparking the ire of the public and political opponents of the military.

The country's anti-corruption agency cited "no grounds" for an investigation into the scandal surrounding Prawit Wongsuwan's penchant for pricey timepieces, which captivated the kingdom earlier this year and drew criticisms in a rare lightning rod of dissent as the Thai public grew weary after four years of military rule.

The 73-year-old was caught last December wearing a luxury watch in a photo, inspiring online sleuths to dig up old photos of at least 22 watches collectively worth US$1.2 million on his wrist, including 11 Rolexes, eight Patek Philippes and three Richard Milles.

Questions arose over how a general on a relatively humble public servant's salary could afford items undeclared on his US$2.7 million list of assets on taking office, leading the kingdom's anti-graft agency to open a probe into his wrist bling.

The National Anti-Corruption Commission (NACC) announced on Thursday in a press conference its eight-person committee voted 5-3 to dismiss the case.

"This case has no grounds that General Prawit Wongsuwan had intended... to hide the truth or had intended to hide the origins of such assets," said NACC deputy secretary-general Worawit Sukboon.

The investigation found that all the watches adorning Prawit's wrists belonged to his now-deceased friend, wealthy businessman Pattawat Suksriwong. 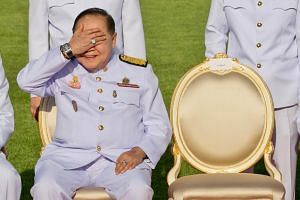 "He had also lent his luxury watches to his other friends."

Worawit added the NACC is still investigating if the general had breached the commission's rules for accepting assets worth 3,000 baht (US$92).

Prawit, who is Defence Minister, was one of the architects of the 2014 coup toppling the government of then Prime Minister Yingluck Shinawatra.

The National Council for Peace and Order (NCPO), the junta's political name, has long wielded its anti-corruption credentials while junta leader Prayut Chan-o-cha has voiced an interest in returning to politics as the country looks towards elections slated for Feb 24.

"We believe it is a double standard. The fact is that (Prawit's) actions violated laws and his reasons are groundless," said party spokesman Ladawan Wongsriwong.

Upstart Future Forward Party called the anti-graft agency a "tool" for the NCPO. "It emphasises the need to get rid of the NCPO and Prayut," spokesman Panika Wanich said.

But political analyst Titipol Phakdeewanich told AFP the public's dissatisfaction with the verdict is unlikely to carry into the polls.

"No matter what the public say or how angry the people are, it wouldn't change anything," said Titipol, dean of Ubon Rachathani University's Faculty of Political Science.

"The military still controls everything, every channel of information."

The scandal inspired a round of creative protests.

In February, Thai students at a pre-football match ceremony in Bangkok wheeled a series of parade floats that included a puppet with a glittering ring and watch beaming from a massive papier mache hand.

"All 22 watches, all borrowed from a friend - his friend must have a shop selling watches," said a commenter on an online website after Thursday's verdict.