Thai political parties - one as young as one month old - are gearing up for the kingdom's first national election since 2011, when Pheu Thai's Yingluck Shinawatra was vaulted into power. She was ousted by a military coup just three years later. Supporters of Prime Minister Prayut Chan-o-cha, who was behind her ouster, are widely expected to push for his return to premiership after the Feb 24 vote.

When poor people in Thailand queued to collect billions of baht in state-alloted cash handouts recently, critics accused the military government of using the exercise to raise the profile of its allied political party.

But the leader of the party in question, Dr Uttama Savanayana, is shrugging off the allegation as mere bluster as Asean's second-largest economy counts down to its first election in eight years.

"We are not just giving away stuff. We are helping them to improve themselves, creating new opportunities for themselves and their families," the chief of Palang Pracharath Party - and Thailand's Minister of Industry - told The Sunday Times. "You need to be able to lift them up enough so they have the strength to change."

The University of Massachusetts-educated minister has faced down a slew of allegations since his party - named after a development programme created by the current government - was launched in September.

Critics paint Palang Pracharath as a vehicle to extend the premiership of Prime Minister Prayut Chan-o-cha beyond the Feb 24 general election.

They allege that the election has been rigged in its favour, and that constituency boundaries have been redrawn to coerce politicians to cross over from the former ruling Pheu Thai Party.

In an interview at his ministry last Tuesday, a calm, measured Dr Uttama denied the allegations.

"These are seasoned politicians. They make their decisions," he said. "They all want to win in their districts and so they have to evaluate where their best chances lie... If they don't think you are their best bet, they won't come, no matter who you are." 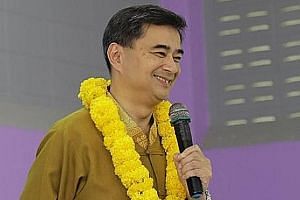 The politicians jumped ship because they liked Palang Pracharat's policies and strategies, he suggested.

"I think everybody likes to have stability, which our party stresses."

Citing the past decade or so of political turmoil - punctuated by two military coups, massive street protests and violent confrontations - he said: "We want stability and we have a clear strategy to get things done.

"A number of us have been working on moving Thailand forward on the strategies and more importantly, on the implementation. So we have results to show."

His party, he said, was not "selling dreams". "We have shown what has been accomplished and what will come next if we have the opportunity to lead the country again in the future government." 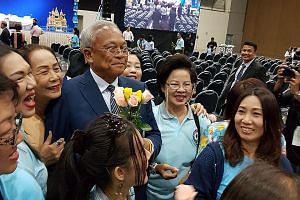 Thailand's economy has recovered steadily since 2014, when months of debilitating street protests plunged its growth below 1 per cent.

Last year, it logged 3.9 per cent growth, though economists warn that global trade tensions will cloud the outlook in the coming months.

Since then army commander Prayut staged a coup in 2014, the military government has launched its own grassroots development programme called Pracharat and tried to streamline aid for the poor with smart cards topped up with regular credit by the government for the purchase of essentials.

It has staged international roadshows to plug a new manufacturing and services hub across three provinces called the Eastern Economic Corridor.

To Dr Uttama, it would be ideal if Mr Prayut gets to keep his job.

"I think that Thailand needs a strong and capable leader... during this period of reform and transformation of Thailand. And I think that Prime Minister Prayut is suitable for that," he said.

Mr Prayut, who wore his military identity with pride during his early days as prime minister, has fewer qualms about referring to himself as a politician these days. He has not joined Palang Pracharath yet and does not need to.

Thailand's new Constitution allows someone who has not been elected by the public to be prime minister, as long as he or she wins enough votes from the elected Lower House and the appointed Senate.

"What this party hopes is that we will have politics that will positively create an environment for the sustainable development of Thailand.

"That type of politics, rather than disruptive politics."