JAKARTA (THE JAKARTA POST/ASIA NEWS NETWORK) - It is that stressful time of the year again for senior Indonesian students.

From March until May, 8.3 million students from 103 schools across the archipelago are going to take the national exams.

Senior students from vocational schools began the three-day exams on Monday (March 25), including those in disaster-hit areas.

With two tsunamis and thousands of earthquakes and floods in the past nine months, this year's exams are not easy for them.

In Lombok, West Nusa Tenggara (NTB), which experienced a string of major earthquakes and landslides, students get easier exam problems than other provinces.

Mr Surunji said students from affected regions got different exam questions from those in other regions.

"The questions were set by the Education and Culture Ministry, but with a difficulty level that is lower than in other regions," he said.

The special policy to make exam problems easier for students is standard practice for the ministry when a disaster disrupts the teaching and learning process for a long time in an area.

As the exams were now computer-based, Mr Surunji said students whose schools were destroyed by the earthquakes would share computers and classrooms with other schools. 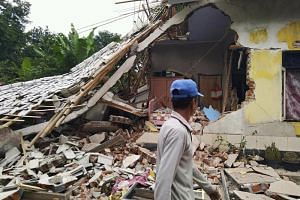 2 Malaysians killed, many injured by earthquake-triggered landslide on Lombok

In North Sumatra, students from 25 vocational schools still have to rely on paper-based exams this year because of a lack of facilities.

North Sumatra Deputy Governor Musa Rajekshah said 940 vocational schools had held the computer-based exams (UNBK) this year, and he promised to help the other 25 next year so all vocational school students in the province could participate.

"Ninty-seven per cent of the schools have joined the UNBK this year, and this is a good thing. But I promise to make my best effort so next year 100 percent of schools will hold UNBK," Mr Musa said on Monday.

"Ninty one per cent of students are ready to take the UNBK. This year's number of UNBK participants increased significantly from the number of students in the 2018 UNBK," the Education and Culture Ministry's research and development unit head, Totok Suprayitno, said.

The ministry said that this year seven provinces were ready to hold 100 percent computer-based exam at all levels of education in their regions namely Aceh, South Kalimantan, Jakarta, Gorontalo, East Java, Yogyakarta and Bangka Belitung.

Since it was first launched in 2014, the UNBK was hoped to boost the integrity index of the exam results and solve the cheating issues that often emerged during the exams.

"Some parents must buy laptops for their children. Schools must share resources with other schools, or borrow from the community. They also have to guard the computers so they will not get stolen," he said.

Mr Heru said that although now it might be cheaper for the government to organize the national exam compared to when they held it traditionally with papers, it is now the schools who have to spend time and money to prepare everything because not all schools have computers and an internet connection.