BANGKOK - Faced with a surging Covid-19 outbreak fuelled by the highly contagious Delta variant, Vietnam called for public donations in June to accelerate its vaccination drive.

It amassed over 8.6 trillion dong (S$512 million), including donations from global conglomerates Samsung and Toyota, which were eager to avoid manufacturing disruptions.

Then, last Saturday (Aug 14), Hanoi announced it would allocate 8.8 billion dong of these donations to clinical trials of Covivac, a vaccine candidate created by the health ministry's Institute of Vaccines and Medical Biologicals. Vietnam's other leading home-grown vaccine candidate, Nanocovax, is now being put through third-phase clinical trials.

"We have to speed up because Vietnam is facing a shortage of vaccines," says Dr Do Minh Si, research and technology director at Nanogen Pharmaceutical Biotechnology. "Some foreign vaccines like Pfizer or Moderna come with extremely strict storage conditions (that require very low temperatures). When they arrive in Vietnam, it is very hard to distribute them to distant rural areas."

Only when Vietnam develops its own Covid-19 vaccine can vaccine security be assured, he stresses. "This is essential."

Similar sentiments are being expressed in many parts of Asia, where the surge of Covid-19 infections, shortage of vaccines, and uncertainty about the efficacy and longevity of current vaccines against new variants are driving the search for home-grown solutions.

In South-east Asia, with the exception of Singapore and Cambodia, the shortage of vaccines has been especially acute. Recent donations by vaccine powerhouses China and the United States constitute mere drops in the ocean of unmet needs.

In Thailand, for example, where less than 10 per cent of the population have been fully inoculated, the chaotic roll-out of Sinovac, Sinopharm, AstraZeneca and Pfizer vaccines has caused an outcry. Although the kingdom is manufacturing AstraZeneca vaccines under licence, it revealed on Monday that it was trying to "borrow" 150,000 doses from Bhutan.

Across the world, there are 112 Covid-19 vaccine candidates in clinical development. According to the World Health Organisation (WHO), just over a third of them are protein subunit vaccines, which rely on isolated proteins from viral or bacterial pathogens to stimulate an immune response. The second most common type of vaccines under development are RNA ones, which rely on copies of the virus' genetic code.

Regional economies that do not have any home-grown vaccine approved by the World Health Organisation for emergency use are trialling at least 16 vaccine candidates, a Straits Times check showed.

Development and regulatory processes are being expedited. Vietnam's Nanogen, for example, told ST that it started its second-phase trial midway through its first-phase trial, monitoring both at the same time.

The health authorities in Taiwan and India fast-tracked the process by granting emergency authorisation to use locally developed vaccines that had not completed their third-phase clinical trials.

In Taiwan, where geopolitical wrangling has kept the percentage of fully inoculated people at about 3 per cent, President Tsai Ing-Wen will get her first dose of Medigen Vaccine Biologics Corporation's vaccine on Monday.

Taiwan's Food and Drug Administration says it granted the Medigen vaccine authorisation for emergency use because the neutralising antibodies it generated in recipients compared favourably with those who received shots of the AstraZeneca vaccine.

Taiwan's first local Covid-19 vaccine to be available from Monday

Promising pipeline of Covid-19 vaccines in India, but affordability is key

In South Korea, which is manufacturing four different Covid-19 vaccines under licence, President Moon Jae-In has vowed to dedicate more resources. "Developing home-grown vaccines swiftly is also of paramount importance to secure vaccine sovereignty," he told a meeting of private and public sector executives on Aug 5.

Japan is trying to do the same. At least four companies there are now in various stages of clinical trials. However, given Japan's steady progress with inoculations with imported vaccines, the pharmaceutical firms will probably have to look abroad to find subjects for final-stage clinical trials.

The rush to produce home-grown vaccines has its costs. Ms Malini Aisola, co-convener for the watchdog All India Drug Action Network, tells ST that the Indian government's single-minded push for companies to apply for emergency approval in the name of speed and national pride led to premature regulatory approvals and hasty trials. Inadequate data and doubts about efficacy also exacerbated vaccine hesitancy in the country, she says.

Four in running for Covid-19 vaccines in Japan, but regulations causing lags

Professor Guy Marks from the Woolcock Institute of Medical Research in Australia argues that the race to produce local vaccines has got more to do with nationalism than need.

The world needs to develop vaccines that are robust to future Sars-CoV-2 mutations and prevent people from getting infected rather than just prevent severe illness, he points out.

"This is a global problem. We can only solve it if there is a level of global cooperation, and that has been in limited supply at the moment," he says.

In the race against Covid-19 variants, how quickly can drugmakers respond?

But Dr Ravi Ganapathy, who heads vaccine process development at the International Vaccine Institute, says there are still huge markets for the vaccines currently under development.

"In three to six months' time, the pandemic in most developed countries could be under control. Most people will be vaccinated, so whatever vaccines are developed would be for boosters," he tells ST. "But in many African and South American countries, there is still a huge need."

The vaccines that come on stream then can go towards meeting those needs, especially if they are cheaper than those produced in developed countries, he says.

Countries currently trying to smooth out regulatory hurdles for vaccine development and ramp up manufacturing capacity will also be in a better position to cope with endemic Covid-19.

"If these become endemic countries and they need to have yearly shots like you have for the flu, then all these governments need not rely on imports," he says. 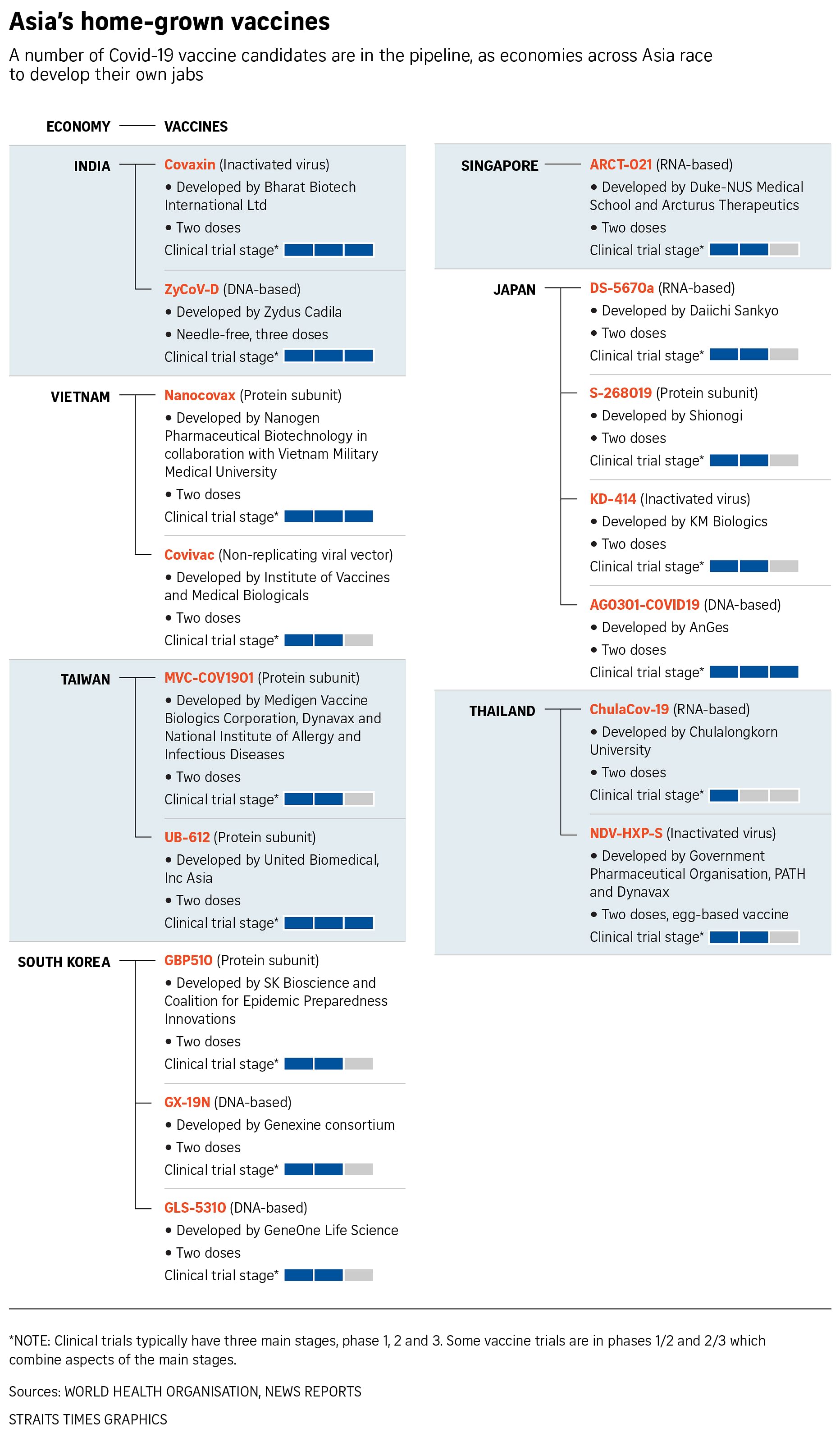