JAKARTA (BLOOMBERG) - Indonesia wants to re-position its Batam island as an alternative shipping and manufacturing hub to Singapore with a potential to draw US$60 billion (S$81 billion) in new investment.

Batam and nearby islands - located less than 30km south of Singapore - have attracted about US$20 billion of investment since the government began promoting them as industrial area in the 1970s.

The region, declared a free-trade zone in 2007, is home to thousands of local and foreign firms producing goods from computers to oil rigs.

Now, the authorities want to expand benefits to businesses by reclaiming about 8,000 hectares of idle or confiscated land to offer to exporters or producers of import substitutes.

"We aim to develop enclaves of special economic zones in Batam" with dedicated clusters for tourism and logistics among others, Mr Edy Putra Irawady, the acting head of Batam Indonesia Free Trade Zone Authority, said in an interview.

"Based on a rough calculation, the potential investments including those in the pipeline are worth around US$60 billion."

The Batam free-trade zone consists of eight islands measuring 71,500 hectares. It has grown in importance as an investment destination for foreign companies, especially Singaporean firms, given its location in one of the busiest shipping channels, cheap labour and tax breaks. Companies operating in the free-trade area are exempt from value-added and luxury taxes, as well as import duties.

President Joko Widodo's administration is seeking to boost exports to help curb a widening current-account deficit, a key risk for the economy and one of the reasons why investors sold off the currency amid an emerging-market sell-off last year. 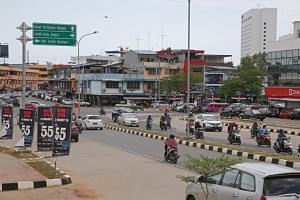 Turning Batam into a Special Economic Zone: The Jakarta Post

Taiwan's Pegatron Corp has already announced an investment partnership with local electronics manufacturer PT Sat Nusapersada, while Apple Inc plans to open a new developer academy in Batam, according to the ministry.

Companies are also keen to invest in tourism, electronic goods and shipyard industries, Mr Irawady said. Under the special economic clusters, companies will enjoy tax incentives and benefits stipulated under free-trade agreements of Asean, he said.

The extension of the Asean free trade benefits may spur companies in Batam to directly supply goods to other regions in Indonesia rather than routing it through Singapore, Mr Irawady said.

The authority is also expanding the capacity of Batam international airport, which along with the popular tourist destination of Nongsa, will be turned into the first special economic zone in the island dedicated for tourism in the next two years, Mr Irawady said.

Batam's strategic location - along the Malacca Strait connecting the international shipping routes between the Indian and Pacific oceans - is a key advantage the authority wants to promote further, he said.

"Singapore has already been too crowded. Talking about crude trans-shipment service, for instance, some vessels have moved out from Singapore to Batam," he said.

"Shippers from regions such as Jakarta and Semarang also rely on direct call services in Singapore to deliver their goods overseas. We want to shift them all to Batam later."