KUANTAN, Malaysia (REUTERS) - When Malaysia's political parties unfurled their election flags and banners this month, Prime Minister Najib Razak's critics sniggered on social media that the manufacturer named on banners of his ruling coalition was Chinese.

Mahathir Mohamad, who heads an alliance hoping to oust Najib, has seized on popular disquiet about Chinese investment pouring into Malaysia and turned it into an election issue.

Najib, he says, is selling Malaysia out to China.

This could matter for Beijing's Belt and Road Initiative (BRI) and for Malaysia's economy because Mahathir, who was the country's prime minister for more than two decades, has vowed to reconsider Chinese contracts if the opposition wins on May 9.

"Coming in here, buying land, developing luxurious towns, is not beneficial for us," the 92-year-old former leader said of China's investments in a recent interview with Reuters. "Quite definitely, we will review."

Najib has repeatedly shrugged off Mahathir's barbs on China, saying that allowing foreign direct investment does not amount to selling the country's sovereignty.

A senior leader in the ruling coalition, commenting on the banners made in China, said: "The opposition are doing the same thing ... because simply it is cheap and efficient." 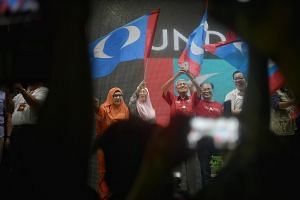 I would be PM for two years at most: Mahathir

A Nomura report this month on the Belt and Road initiative showed that Malaysia is one of the largest beneficiaries of Chinese investment commitments in Asia, securing US$34.2 billion (S$45.4 billion) of BRI-related infrastructure projects.

There have been concerns in some BRI host countries, such as Sri Lanka and Pakistan, about rising debts levels, over-reliance on China and the environmental impact of mega-projects. Critics also say some projects give China access to strategic locations and trade corridors that could hurt the sovereignty of nations.

Objections to Chinese investments in Malaysia, however, have focused on the presence of thousands of Chinese workers, heavy dependence on Chinese materials, and limited opportunities for local companies.

For instance, the US$100 billion township project by Chinese developer Country Garden in the Iskandar Malaysia special economic zone of Johor state, has ruffled feathers in a bastion of support for Najib's United Malays National Organisation (Umno).

Johor locals complain that large numbers of Chinese people have been allowed to own properties in the project, which is called Forest City. Last year, Chinese nationals accounted for about 70 per cent of apartment buyers there.

Other grievances over Forest City have included environmental damage, a property market glut, and the impact of land reclamation on the local fishing industry.

Najib's Barisan Nasional (BN) alliance, dominated by Umno, is widely expected to defeat Mahathir's Pakatan Harapan coalition in the election, but will most likely be relying on the country's majority Malays to do so.

Malaysia's own economically powerful ethnic Chinese voted heavily for the opposition at the last election in 2013, handing the Umno-led coalition its first-ever loss of the popular vote. Najib called it a "Chinese tsunami".

This time, Najib needs to win comfortably to avoid a leadership challenge and, to do that, he will need to reassure voters angry over the cost of living and corruption as well as fend off opposition attacks over Chinese investments.

"Please do not support and believe in what they are saying,"Najib said at a community event in Kuala Lumpur this week. "If you do, this would only hurt our economy." Ties between Malaysia and China have flourished under Najib, who visited Beijing in both 2016 and 2017.

The prime minister is under a cloud over a long-running scandal at state fund 1Malaysia Development Berhad (1MDB) but Chinese state-linked firms have purchased power assets and real estate linked to 1MDB, helping resolve some of its debt issues.

Najib has consistently denied any wrongdoing over billions of dollars that went missing from 1MDB but at least six countries, including the United States, are investigating transactions related to the fund.

Chinese firms are leading the construction of a 3,000-acre industrial park, which is rising out of sight behind what locals call a "Great Wall", and they have taken a 40-per cent stake in the operator of a deep water, multi-cargo port nearby.

Meanwhile, China Communications Construction Co Ltd is building a 55 billion ringgit ($14 billion) rail line that will link Malaysia's east coast on the South China Sea to Kuala Lumpur and the strategic shipping routes of the Strait of Malacca in the west.

But local entrepreneurs feel left out of the bonanza.

"To me, the China investments here look fishy and don't seem to benefit the locals as we hoped for," said Syed Heider, a Kuantan-based building materials supplier who recently switched allegiance from Najib's BN to the opposition. "Of 10 people that I know, eight people have already swung to Pakatan."

At a recent groundbreaking ceremony in Kelantan state, the northern end of the rail line, Najib said Malaysia would have been "stupid" not to work with China because it offered a loan for 85 per cent of the project value with a grace period of seven years.

Stressing the development potential for one of the country's less developed states, he said the link would create 80,000 jobs and the project operator would be obliged to give at least 70 per cent of these to local workers.

Noting that less than 20 per cent of the east coast line's workers are Chinese, Minister of International Trade and Industry Mustapa Mohamed told Reuters that China and Malaysia are trying to avoid a repeat of Forest City's tensions.

"In hindsight, the Forest City experience taught them some lessons, and us as well ... policymakers have learnt quite a bit from this and now the Chinese understand the importance of respecting local practices," he said.