YANGON (REUTERS) - Two Reuters journalists accused of violating Myanmar's Official Secrets Act appeared in court on Tuesday (Feb 6), with prosecutors due to present more witnesses to determine whether they should be charged under the colonial-era law.

Wa Lone, 31, and Kyaw Soe Oo, 27, were in handcuffs as they were brought to the Insein district court in Yangon, where dozens of reporters and diplomats were present to witness the proceedings.  The two journalists had worked on Reuters coverage of a crisis in Rakhine state, where an army crackdown on insurgents since the end of August has triggered the flight of 688,000 Rohingya Muslims, according to the United Nations.

The reporters were detained on Dec 12 after they had been invited to meet police officers over dinner in Yangon. They have told relatives they were arrested almost immediately after being handed some documents at a restaurant by two officers they had not met before.

At the last court hearing on Thursday, prosecution witness Police Major Min Thant agreed during cross-examination by the defence that the information in documents that Wa Lone and Kyaw Soe Oo were holding in their hands at the time of their arrest had already been published in newspaper reports.

The two reporters, whose application for bail was declined at the last hearing, have now been in detention for eight weeks, first in police custody and then in Yangon's notorious Insein prison.

Reuters President and Editor-in-Chief Stephen J. Adler expressed disappointment at the decision on the bail application and called for the journalists' prompt release.

"They should have the opportunity to be with their families as the hearings continue," Adler said in a statement. 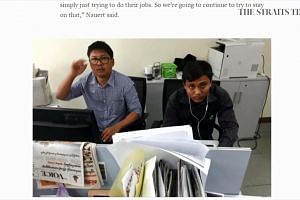 "We believe the court proceedings will demonstrate their innocence and Wa Lone and Kyaw Soe Oo will be able to return to their jobs reporting on events in Myanmar."

The Official Secrets Act dates back to 1923 - when Myanmar, then known as Burma, was under British rule - and carries a maximum prison sentence of 14 years.

The two journalists have been accused under Section 3.1 (c) of the act, which covers entering prohibited places, and taking images or obtaining secret official documents that "might be or is intended to be, directly or indirectly, useful to an enemy".

Government officials from some of the world's major nations, including the United States, Britain and Canada, as well as top UN officials, have called for the reporters to be freed.