YANGON (Reuters) - Myanmar's government said on Wednesday (Dec 13) that police had arrested two Reuters journalists, Wa Lone and Kyaw Soe Oo. The reporters had been working on stories about a military crackdown on the Rohingya Muslim minority in Rahkine State that has caused almost 650,000 people to flee to neighbouring Bangladesh.

The Ministry of Information said in a statement on its Facebook page that the journalists and two policemen face charges under the British colonial-era Official Secrets Act. The 1923 law carries a maximum prison sentence of 14 years.

The reporters "illegally acquired information with the intention to share it with foreign media", said the statement, which was accompanied by a photo of the pair in handcuffs.

It said they were detained at a police station on the outskirts of Yangon, the South-east Asian nation's main city.

Wa Lone and Kyaw Soe Oo went missing on Tuesday (Dec 12) evening after they had been invited to meet police officials over dinner.

Reuters' driver Myothant Tun dropped them off at Battalion 8's compound at around 8 pm and the two reporters and two police officers headed to a nearby restaurant. The journalists did not return to the car.

The Rohingya refugees in Bangladesh say their exodus from the mainly Buddhist nation was triggered by a military counter-offensive in Rakhine state that the United Nations has branded "a textbook example of ethnic cleansing". 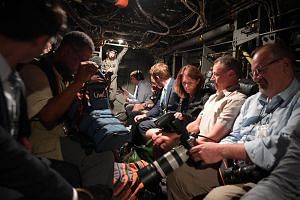 'A dangerous time to be a journalist': Press freedom at lowest level for a decade 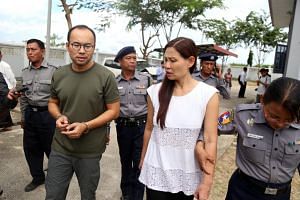 "Reuters reporters Wa Lone and Kyaw Soe Oo have been reporting on events of global importance in Myanmar, and we learned today that they have been arrested in connection with their work," said Stephen J. Adler, president and editor-in-chief of Reuters.

"We are outraged by this blatant attack on press freedom. We call for authorities to release them immediately," he said.

A spokesman for Myanmar leader Aung San Suu Kyi confirmed that the two journalists had been arrested.

"Not only your reporters, but also the policemen who were involved in that case," spokesman Zaw Htay said.

"We will take action against those policemen and also the reporters."

In Washington, State Department spokesman Heather Nauert emphasised that the agency was "following this closely". She said that US Ambassador Scot Marciel on Wednesday had a conversation with two government officials in Myanmar who seemed "genuinely unaware" of the situation.

"We care about the safety and security of international reporters who are simply just trying to do their jobs. So we're going to continue to try to stay on that," Nauert said.

The US embassy in Yangon said in a statement posted on its website on Wednesday it was "deeply concerned by the highly irregular arrests of two Reuters reporters after they were invited to meet with police officials in Yangon last night".

"For a democracy to succeed, journalists need to be able to do their jobs freely," the embassy said.

"We urge the government to explain these arrests and allow immediate access to the journalists." The European Union's mission in Yangon also voiced concern.

"The EU delegation is closely following their case and we call on the Myanmar authorities to ensure the full protection of their rights," it said in a statement.

"Media freedom is the foundation of any democracy." The New York-based Committee to Protect Journalists called for the reporters' immediate and unconditional release.

"These arrests come amid a widening crackdown which is having a grave impact on the ability of journalists to cover a story of vital global importance," said Shawn Crispin, CPJ's senior Southeast Asia representative.

Wa Lone, who joined Reuters in July 2016, has covered a range of stories, including the flight of Rohingya refugees from Rakhine in 2016 and, in much larger numbers, this year.

He has written about military land grabs and the killing of ruling party lawyer Ko Ni in January. This year he jointly won an honourable mention from the Society of Publishers in Asia for Reuters coverage of the Rakhine crisis in 2016.

He previously worked for The Myanmar Times, where he covered Myanmar's historic 2015 elections, and People's Age, a local weekly newspaper, where his editor was Myanmar's current Minister of Information Pe Myint.

He has covered the impact of the Aug 25 attacks on police and army posts in the northern Rakhine, and reported from the central part of the state where local Buddhists have been enforcing segregation between Rohingya and Rakhine communities.

"I have been arrest" were the four words that Wa Lone texted to Reuters Myanmar bureau chief Antoni Slodkowski on Tuesday evening to let him know what was happening. Very soon after that Wa Lone's phone appeared to have been switched off.

Over the next 24 hours, Reuters colleagues in Yangon filed a missing persons report, went to three police stations, and asked a series of government officials what had happened to the two reporters. They got no official information until Wednesday evening.