BANGKOK (BLOOMBERG, REUTERS) - Thailand's pro-military party won the most votes in Sunday's election, authorities confirmed on Thursday (March 28), bolstering its claim to legitimacy as it competes with an anti-junta alliance to form a government.

The results represented 100 per cent of the ballots counted but would remain unofficial until final results are announced on May 9, after the coronation ceremony of King Maha Vajiralongkorn.

The Election Commission is also investigating complaints that could result in changes to seat allocations in the 500-seat House of Representatives.

Results for the lower house’s 350 directly elected “constituent seats” showed Pheu Thai with 137 and the Palang Pracharath with 97. The remaining 150 House of Representatives seats are allocated according to a complex formula involving the total number of votes for each party.

However, parties have been calculating their share of the allocated seats based on partial results, and both Palang Pracharath and Pheu Thai have claimed they have a mandate to form the next government.

Pheu Thai said on Wednesday it formed a seven-party coalition that unofficially would have 255 seats in the 500-member lower house, a claim rejected by the military’s proxies. 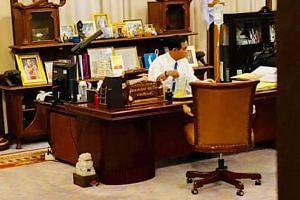 Pheu Thai-led coalition creates only strong opposition, not government - at least not yet

The power struggle could drag on for weeks or months, as the Election Commission has said it has until May 9 to issue final results before a vote occurs in parliament.

The Election Commission is also investigating complaints that could result in changes to seat allocations.

The early results suggest that any coalition that emerges is likely to be weak and unstable, making it difficult to pass legislation.

Both larger groups would need to rely on a range of smaller regional parties to push through key policies.

The prime minister will be selected in a joint vote of the lower house and a 250-strong junta-appointed Senate that’s expected to back junta chief and current prime minister Prayut Chan-o-cha.

Pheu Thai only contested about about two-thirds of constituencies up for grabs after one of its allied parties was banned in the run-up to the election. Palang Pracharath won fewer constituencies but benefited from having candidates across Thailand, allowing it to gain more votes.

Palang Pracharat, which campaigned on keeping on coup leader Prayuth Chan-ocha as elected prime minister, said it had the popular mandate because it had won the most votes nationwide.  It said on Thursday it was in no hurry to form a coalition as official results will not be released until May 9.

“The number of seats we have still hasn’t reached 250, and it decreased after the results,” party secretary-general Sonthirat Sontijirawong told reporters.  “We still have time.”

Sudarat Keyuraphan, a prime ministerial candidate for Pheu Thai, said at an earlier briefing that it would form a government “because that’s how people voted.”

“You can’t expect a gold medal when you came in second place,” she later wrote on her Facebook page.