JAKARTA - Lawyers for Indonesia's defeated presidential candidate Prabowo Subianto spent the past four days trying to cast doubt on the online vote count information system and voter rolls in their bid to prove that the April 17 election was rigged, but experts say their chances of success are slim.

Analysts say the lawyers failed to produce sufficient proof to back their claims of "structured, systematic and massive" electoral fraud, so the Constitutional Court is unlikely to overturn the official results.

Mr Agus Muhammad Maksum, a member of the Prabowo campaign team whose job was to scrutinise the final voter list, said on Wednesday, the second day of the hearing, that there were 17.5 million problematic voters. This included large numbers sharing the same dates of birth, and those with invalid identity card numbers.

Mr Agus, citing a certain "Udung" on the list, said the voter had an invalid identity card number and declared that "we are certain (he) does not exist in this world".

When pressed further by elections commission commissioner Hasyim Asy'ari, Mr Agus wavered, conceding that he had no proof to show whether Udung existed or not.

This drew a swift rebuke from Justice I Dewa Gede Palguna, who said: "Just now, you said Udung did not exist. You said it with confidence, but now you tell us you don't know for certain. Which should the court use as reference?"

Mr Agus, one of 14 witnesses and two experts called by Mr Prabowo's lawyers, later admitted he did not know if Udung existed or not. 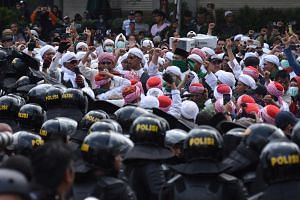 Last month, the elections commission declared President Joko Widodo and his vice-presidential pick Ma'ruf Amin had won the election with 55.5 per cent of the vote.

The Prabowo camp refused to concede defeat, claiming that the retired army general and his running mate Sandiaga Uno had been denied victory by massive electoral fraud. It launched a legal suit to get the official results overturned.

The hearing has been held amid tight security, with more than 13,000 police and troops deployed in Jakarta to avoid a repeat of last month's post-election violence.

On Thursday (June 20), Professor Marsudi Wahyu Kisworo, an IT expert and the architect of the online vote count information system used in the polls, set out to show why Situng, as the system is known, could not be used to rig votes.

The IT expert said that changes in the vote tally recorded by Situng occurred in many places and did not have a regular pattern.

"If there is a consistent pattern in one place, city or province, we may guess there are such attempts (to rig the votes)," he said, referring to data uploaded to Situng one week after the April 17 election.

Mr Prabowo's legal team has not presented a convincing case before the court, analysts said.

"I don't think this is a hard case to decide," Mr Made Supriatma, an ISEAS - Yusof Ishak Institute visiting fellow said, noting that the arguments put forth were similar to those in 2014, when Mr Prabowo also challenged the election results. The court upheld the official results handing victory to Mr Joko.

"Polling by Kompas, the biggest paper in Indonesia, showed that most of those who had voted for him (Prabowo) already accepted the results," he added.

Ms Titi Anggraini, executive director of the Association for Elections and Democracy, said based on her assessment of the four days of hearing, the Prabowo suit stood only a slim chance of success.

"The witnesses and experts called by the Prabowo team have not given solid arguments to prove there was structured, systematic and massive fraud. They pointed out instances of fraud, but these were random, partial and limited in scope," she said.

The court is scheduled to issue its ruling on the case on June 28.