The accusations of massive fraud in the April 17 presidential polls made by defeated candidate Prabowo Subianto are vague and baseless, lawyers for the General Elections Commission (KPU) and President Joko Widodo's campaign team said yesterday.

The first day of the hearing into the legal challenge to the results mounted by Mr Prabowo - now defeated twice by Mr Joko in the presidential race - saw legal teams for the incumbent and the election authorities going all out to discredit the former general's case.

They charged that there was a lack of proper evidence, criticising Mr Prabowo's lawyers for relying heavily on "assumptions" and media reports to back their claims.

Mr Yusril Ihza Mahendra, head of Mr Joko's legal team, urged the Constitutional Court, which is hearing the suit, to reject it in its entirety.

"We consider the lawsuit full of assumptions without strong legal basis or evidence. We consider it vague and not worthy of consideration," said the former law minister.

Mr Prabowo and his campaign team have refused to concede defeat despite the official results on May 21 showing Mr Joko and his vice-presidential pick Ma'ruf Amin winning the polls with 55.5 per cent of the vote.

Instead, they have claimed that Mr Prabowo and his running mate Sandiaga Uno were the rightful winners with 52 per cent of the votes, based on what they said were the "correct number of votes cast". 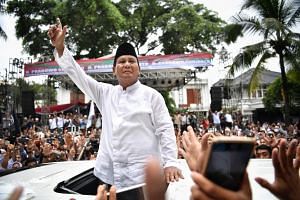 Pointing to the fluctuating vote numbers given by the opposition, Mr Joko's lawyers decried the claim as "imaginative".

Just hours after the polls closed, Mr Prabowo claimed that his team had secured 62 per cent of the votes. But he revised this to 52 per cent later.

The claims of fraud by his team included, among other things, data entry errors of votes in the KPU's online vote count information system known as Situng, and irregularities in the voter list.

Mr Prabowo's camp had, at the pre-trial hearing last Friday, said that 12 truckloads of evidence had been sent to the court, but only one was allowed to enter.

But on Monday, a spokesman said that some of the evidence would be submitted in digital form - and the team would likely no longer be sending 12 truckloads of material.

Yesterday, Mr Bambang Widjojanto, head of Mr Prabowo's legal team, questioned the gap in the number of actual polling stations run by the KPU and the figure reported in the online vote count system, saying the commission had yet to explain the disparity.

He pointed out that the commission had announced election results on May 21 based on data collected from 812,708 polling stations, but its online system on Sunday recorded 813,336 polling stations.

KPU yesterday rubbished allegations of fraud, with the head of its legal team Ali Nurdin saying that Mr Prabowo's team has not been able to prove that it was "structured, systematic and massive".

The Prabowo team has referred only to a few sporadic and random cases in some polling stations in unknown locations, but the prevailing law, Mr Ali said, stipulated that "structured, systematic and massive" fraud must engage many people, be designed thoroughly and involve public officials and election organisers.

The KPU also said that the Prabowo camp had misunderstood Situng, which was used to promote transparency in the process of the vote count in real-time, and not as an accurate source of the ongoing official tally itself.

And while there were mistakes in the online system - which were later corrected - this accounted for only 0.00026 per cent of total votes, a figure too insignificant to rob Mr Prabowo of the victory he claimed.

"The allegation of manipulation in the system to allow one of the candidates to win is not true," said Mr Ali.

Security was tight around the courthouse yesterday, with more than 13,000 police and troops standing guard amid worries of a repeat of the post-election violence that rocked Jakarta last month.

There were scattered demonstrations though as people - including some dressed as superheroes and ondel-ondel, the large traditional puppets unique to Jakarta - called for peace to be maintained throughout the hearing, and urged the court to be impartial.