MANILA - The Philippines and the United States have agreed to step up efforts to fight violent extremism in the South-east Asian nation following the first suicide attack carried out by a Filipino militant in June.

"We know danger still exists in parts of the country. This is why counter-terrorism has been such a key element of our bilateral cooperation," US Ambassador to the Philippines Sung Kim told reporters shortly after two days of bilateral talks between Manila and Washington ended on Tuesday (July 16).

His counterpart, Mr Jose Manuel Romualdez, said in the same news briefing that the talks were "clearly very productive in the sense that we were able to discuss how we can cooperate even more, especially with what happened with the recent bombing in Jolo".

Security officials confirmed last week the first-ever case of a suicide attack carried out by a Filipino, in what they said marked an escalation in the deadly tactics used by militants linked to the Islamic State in Iraq and Syria (ISIS).

Norman Lasuca, 23, who ran away from home four years ago because of the beatings he received from his father and later joined the Abu Sayyaf extremist group, set off on June 28 one of two bombs that exploded inside a temporary camp of a special army counter-terrorism unit in Indanan town, on Jolo island, 1,000km south of the capital Manila.

Three soldiers who were manning the camp's gate were killed, along with three civilians who were nearby.

Lasuca and another attacker had explosives strapped around their torsos. Both died.

ISIS later claimed responsibility for the attack, although security officials insisted the group had nothing to do with it.

Security officials and analysts said the attack was a "game changer". 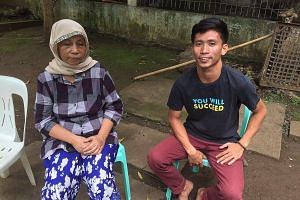 There have been two other instances of suicide bombings in the Philippines since last year. But both involved militants from abroad.

"These are millennials. They are influenced by a lot of indoctrination via social media. Their level of frustration is much higher compared to the old ones'," he said.

Over 200 US troops are in the southern Philippines, as part of a counter-terrorism campaign that began in 2002, and restarted in 2017.

US Marine commandos were in Marawi in 2017 helping Philippine troops eject militants that had seized half the city for five months.

They helped break the siege by training Philippine snipers and flying drones to gather intelligence.

These efforts are part of a three-year programme started by the US State Department to help grassroots officials in the Philippines pick out and fix problems that could stoke extremism among Muslims.

Mr Kim said the US would continue to look for more ways to help the Philippines defeat militants still fighting in the war-torn southern island of Mindanao.

The Philippine side said in a statement that counter-terrorism efforts would include "improved information sharing" to stem the movement of militants across the region and curb financing for them.

Foreign Affairs Secretary Teodoro Locsin said in a tweet that he told US Assistant Secretary of State David Stilwell, who headed the American side in the talks, that if the US would sell over 70,000 new assault rifles to the Philippines, "Duterte will finish all security threats to our democracy".