PETALING JAYA (THE STAR/ASIA NEWS NETWORK) - Datuk Pahamin Ab Rajab and his five partners who are keen to take over Malaysia Airlines have given their assurances that there will be no job cuts should their plan to turn the ailing airline around be accepted by the government.

The offer through their vehicle, Najah Air, has proof of funding and they will need to conduct a three-month due diligence before unveiling their full turnaround plan for the airline.

"We are looking at taking a 49 per cent stake in the airline and Khazanah Nasional Berhad 51 per cent,'' Mr Pahamin told StarBiz on Thursday (July 4).

He added: "We have assured the Prime Minister that we will not sack anybody at Malaysia Airlines. We will also not ask for financial support from Khazanah or the government. We will (ask to) have the rights to manage without interference from the government.

"The airline will have the same national branding and will not change name. It will remain as Malaysia Airlines and it will be an international airline."

The Pahamin-led group met Prime Minister Mahathir Mohamad this week to express interest to help turn the airline around. The Prime Minister is the chairman of Khazanah, the sole shareholder of Malaysia Airlines.

Despite the many turnarounds in the recent past, the airline has failed to be profitable and now needs more money for its sustainability. The government has made it clear that it cannot fund the airline and is considering either shutting it down or selling a stake to an investor. Several proposals have since emerged.

A decade ago, Australia's Qantas was nearing a deal to take a stake in the airline but the deal was scuttled because of the pressure from Malaysia Airlines' unions. Had that deal gone though, the airline would have been in a sweet spot now. 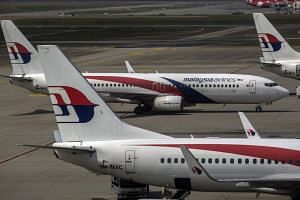 'I love Malaysia Airlines, but we can't afford it': Mahathir says national carrier may be sold

Apart from Mr Pahamin's proposal, there are several others for consideration. Even the airline itself has come up with its own plan to turn in profits. Its sole shareholder Khazanah has its own plan on how it wants the airline to be turned around and could involve a stake sale.

Other proposals that are said to be still on the table include that of some former employees of Khazanah and that of Jentayu Danaraksa Sdn Bhd.

Yet, there is another group, the former employees of Malaysia Airlines who also want to be considered and are waiting to present their case to the Prime Minister.

Among all this, industry experts are excited about the prospects of a stake stale.

"There is said to be a proposal from the Middle East, particularly from Qatar, coming in as an investor. It can either be from its airline, its investment agency or private funds linked to the Qatari royal family,'' said a source.

Mr Pahamin was previously the director-general of the road transport department and was non-executive chairman of AirAsia for seven years from 2001 to 2008.

"We have not been talking to Fernandes. He is not involved in our proposal. He will be my competitor if we get to turn around Malaysia Airlines," Mr Pahamin said.

When asked where was Najah Air going to get the funding to power Malaysia Airlines, Mr Pahamin said: "We will not ask the government for loans or guarantees. In fact, funding is the least of our problems. My partners can get the money. Then people will come and invest. We are talking to local and foreign institutions. We are also talking to those who will be doing the due diligence."

He added that Najah Air was currently in the process of being registered and would be their vehicle to take over the airline.

But who are his partners?

He did not reveal this, merely saying that one is from Britain and the rest are from Malaysia. Both he and the one from Britain have been involved in the aviation industry.

"My partners are the nobodies... They are a few good people who really want to help the airline since everyone is talking about it. So, we did a study to find out what was the problem after the four to five major turnarounds.

"We then decided that we should meet the Prime Minister to put up a plan as to the best way to turn the airline around. We are asking for exclusive rights to do a due diligence, as we do not know what is inside since it is a private company and not listed. The request is that we be given the rights to conduct a due diligence."

"At the end of the due diligence, we would then come up with a specific plan to do what is best for the airline. Let us now wait for the outcome and we would be happy to be given a chance to turn it around," he said.

To him, Malaysia Airlines has structural cost problems and there is a lack of engagement with its employees.

"There is no synergy between management and its people. When you craft a corporate plan, everyone must be involved, you need to give ownership to your employees, you need their support to execute the plan," he noted.

More recently, Malaysia Airlines entered into tie-ups with Japan Airlines and Singapore Airlines (SIA). These are seen as code-share arrangements by the industry, which are a norm, and the airline can have many more code-share agreements, especially to Europe and the United States.

However, the tie-up with SIA did lead to some speculation that SIA may perhaps be an investor.

CAPA Centre for Aviation chief analyst Brendan Sobie said the memorandum of understanding between Malaysia Airlines and SIA had naturally started speculation that the latter would be the white knight strategic investor that Malaysia Airlines needs and one that the Malaysian government has been advocating.

"However, there are many challenges (political and commercial) that would need to be overcome to make that a serious option. It is too early to say how deep this partnership would go, and therefore, how much of an impact it would have,'' he said.

But the code share beyond Kuala Lumpur and Singapore would benefit passengers.