KUALA LUMPUR - The wife of former Malaysian premier Najib Razak is expected to be formally charged soon with as many as 20 counts of money laundering in a case linked to troubled state investment fund 1MDB, the New Straits Times (NST) reported on Tuesday (Sept 18).

The daily said investigators had "tied up all the loose ends" in their probe into Datin Seri Rosmah Mansor, 66.

She was questioned by investigators from the Malaysian Anti-Corruption Commission (MACC) in June in an interview believed to be linked to the probe on SRC International, a former subsidiary of 1MDB, or 1Malaysia Development Berhad.

Najib was last month charged with money laundering over electronic transfers of RM42 million (S$14 million) from SRC International into his personal bank account. He pleaded not guilty and was granted bail.

He and his wife have been barred from leaving Malaysia after his decade in power ended in a shock election defeat in May and the new Prime Minister, Tun Dr Mahathir Mohamad, relaunched an investigation into the 1MDB scandal.

Citing sources privy to the investigation of Madam Rosmah, NST said she could be hit with up to 20 criminal charges, mostly linked to alleged money laundering.

One of the charges, the report said, is likely to pertain to the purchase of hormone-based anti-ageing products from the United States worth just over RM1 million. 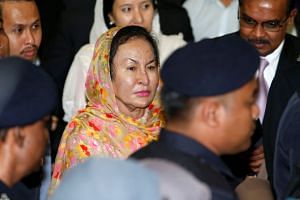 The report said Madam Rosmah, who is known for her penchant for cosmetic treatments and luxury goods, was interviewed by MACC in June because investigators believed that funds from SRC were allegedly used to purchase the oral dietary supplements.

These supplements are said to be able to enhance growth hormone levels by more than 600 per cent.

According to sources cited by NST, a cheque for more than RM1 million was made out to a "Datuk" doctor in February 2015 for the purchase of two sets of medication worth in excess of RM500,000 each.

A similar account number, from records said to be from the probes that allegedly linked Najib to a now-closed AmIslamic account (Kuala Lumpur branch), was visible on the cheque issued to the doctor.

The account was believed to have been closed weeks after the payment was made.

The doctor has told investigators that the cheque was made out for the purchase of "two sets of medication", NST said.

Another product was a 100 per cent plant-based health food to stimulate the human body to maintain youth, vigour and vitality, supposedly with anti-ageing properties.

NST said a cheque from the same account for RM100,000 was allegedly made out, also in February 2015, to a company for construction work at a house in Taman Duta.

The home is the known address of Najib and his wife. The payment was supposedly for work done on a sentry post and a room, among other things.

The NST has also learnt that the doctor, who was vice-president of a society linked to his area of expertise, had resigned from his position, ostensibly to avoid dragging the society into controversy.