Ex-PM surrenders passports and is out on bail; supporters create ruckus outside court

Former Malaysian prime minister Najib Razak has pleaded not guilty to four charges levelled against him in court yesterday in a case linked to state fund 1Malaysia Development Berhad (1MDB) that he founded nearly a decade ago.

He faces three counts of criminal breach of trust (CBT) and one count of abuse of power. The case is being closely watched around the world, with allegations that billions in public monies were misappropriated.

There were chaotic scenes outside the court as dozens of journalists and his supporters jostled to get close to him.

His supporters, who included several Umno leaders, shouted his name and showed placards asking for justice to prevail, and shouted down the Attorney-General.

This was the first time that a former premier has been charged in a court of law in Malaysia, with Najib claiming that the case was politically motivated.

"I believe in my innocence. This is the best opportunity for me to clear my name after being heavily accused," he told reporters at the Kuala Lumpur High Court.

The CBT charges carry jail sentences of no less than two years and up to 20 years, with possible caning and fines. Under Malaysian law, however, men aged 50 years and above are exempt from caning.

For abuse of power, he could be jailed up to 20 years and fined no less than five times the bribe value. 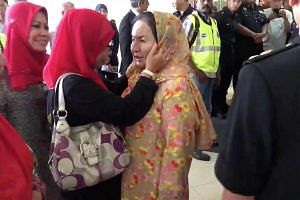 Scuffles break out as Najib's supporters descend on court

No political agenda behind graft charges against Najib, says A-G

The prosecution is led by new Attorney-General Tommy Tho-mas, who heads a 12-member team, while Najib's seven-man defence team is led by senior lawyer Shafee Abdullah.

At the defence's request, Judge Mohamad Sofian Abdul Razak agreed to issue an interim court order barring discussions on the merits of the case outside the court, especially in the media. Tan Sri Shafee said the order would stop anyone from making speculative or false reports against his client.

The gag order will be in place until Aug 8, when the matter is heard.

Najib was charged with CBT involving RM27 million, RM5 million and RM10 million belonging to SRC International, which was entrusted to him between December 2014 and March 2015, when he acted as its adviser. He was then prime minister and finance minister. SRC, an energy company that was originally a 1MDB subsidiary, was placed under the jurisdiction of the Finance Ministry in 2012.

Najib was also charged with abuse of power for allegedly accepting a RM42 million bribe when he was involved in making the decision to provide government guarantees for a RM4 billion loan from a pension fund to SRC.

Among those who turned up at the court was his wife Rosmah Mansor. Meanwhile, her son Riza Aziz was at the anti-graft commission headquarters in Putrajaya for the second day to give a statement over claims that funds misappropriated from 1MDB were used to finance several Hollywood movies his film company produced.