PETALING JAYA (THE STAR/ASIA NEWS NETWORK) - Former Malaysian prime minister Najib Razak's daughter Nooryana Najwa has vowed to fight the Inland Revenue Board (IRB), which has sued her for RM10.3 million (S$3.3 million) in unpaid income taxes from 2011 to 2017.

Nooryana Najwa said she had never thought that being the joint owner of a house with her husband and money that her husband had given her for household expenses could be considered income.

She said that when the IRB started auditing her last year, she submitted all the proof, including detailed bank transfer documents that showed most of the so-called income from abroad were transfers from her husband's family.

"I also furnished proof, showing that my in-laws purchased a home directly using their funds from abroad. My husband's family then listed me as joint-owner of the home," she said in a Facebook post on Tuesday (Aug 27).

"Somehow, this act of listing me as joint owner with my husband is now considered by the government as my 'income'," she wrote.

"And this forms the bulk of the 'tax due', even though the payment for the house did not even go through me."

She also said her husband and his family had been independently wealthy long before they met and that her mother-in-law was previously married to one of Kazakhstan's richest tycoons for 10 years.

She said that even if payments from a husband to wife were considered income, the transfers were from abroad and should not be taxed.

She added that a smaller portion of the so-called income was wang hantaran (dowry), as well as gifts from family and friends.

"At the age of 30 now and having spent many years studying and briefly working overseas, I have never operated any business in Malaysia and have never bid for nor received any government contracts of any sort," she said.

"And I have never had thought that my husband naming me as joint-owner of the house and money that my husband gives me for household expenses can be considered income," she said. 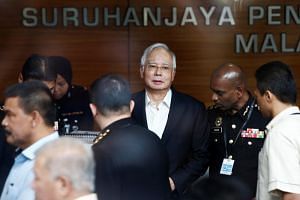 "Just like in the case of my father and siblings, who have been similarly hit on a ridiculous basis, many who know the details of the case are shocked and speechless at how blatant the government is abusing the laws," she said, adding that she did not blame the people in IRB, as there were politicians higher up who were behind it.

The Malaysian government, as the plaintiff, filed a writ of summons and statement of claim through the IRB on July 24 at the Shah Alam High Court in Selangor, naming Nooryana as the defendant.

According to the statement of claim, the Malaysian government alleged she had failed to submit the Individual Income Tax Return Forms to the IRB, under Section 77 of the Income Tax Act 1967, for the years of assessment 2011 to 2017.

The government said that an assessment under subsection 90(3) of the Tax Act, including penalties, had been raised through Notices of Assessment dated March 15, 2019.

The matter is set for case management on Sept 12.