LANGKAWI (REUTERS) - Former Malaysian prime minister Najib Razak says he shouldn't be blamed for the multi-billion-dollar 1MDB scandal, and declares he knows nothing about money from the state fund appearing in his personal account.

He does, though, have explanations for the vast sums of cash, luxury handbags and jewellery recently seized from his homes by the Malaysian authorities.

Speaking to Reuters in his first sit-down interview since his shock May 9 election defeat, Datuk Seri Najib said his advisers and the management and board of 1Malaysia Development Berhad (1MDB) had wrongly kept the alleged embezzlement of funds a secret from him.

Newly-elected Prime Minister Mahathir Mohamad told Reuters on Tuesday that the authorities have "an almost perfect case" against Mr Najib on charges of embezzlement, misappropriation and bribery linked to 1MDB.

Mr Najib, 64, lost the election after a decade in power at least partly because of the 1MDB scandal, which US Attorney-General Jeff Sessions has described as "kleptocracy at its worst".

Mr Najib, in some of his most extensive comments yet on the 1MDB scandal, said he did not know if hundreds of millions of dollars that moved through his personal account was from 1MDB, and if money from the fund was eventually laundered to acquire assets globally, including yachts, paintings, gems and prime real estate.

"I'm not party to the yacht, the paintings... I've never seen those paintings whatsoever," said Mr Najib. "I was not aware of these purchases. This was done without my knowledge. I would never authorise 1MDB funds to be used for any of these items. I've been in government so long, I know what's right and what's wrong."

Najib speaks out in Reuters interview, dismisses any plan to leave Malaysia

Mr Najib was speaking at the interview held at a luxurious sea-facing private villa in a five-star hotel on the Malaysian holiday island of Langkawi.

He blamed 1MDB's board, saying it was incumbent upon them to tell him if something was wrong. 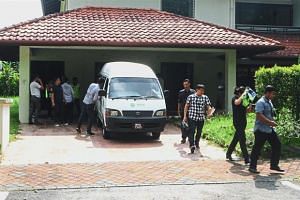 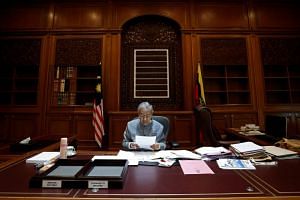 Relaxing in a black T-shirt and brown pants, Mr Najib said he was enjoying golf, food, and time with his family. The family booked the villa to celebrate the Hari Raya Puasa holidays together.

Mr Najib's children, including stepson Riza Aziz, a Hollywood film producer, were with him for the week, his aides told Reuters.

Malaysian investigators looking into 1MDB say they believe that Mr Najib and his wife Rosmah Mansor have amassed vast amounts of wealth and property using funds from the state fund.

Datin Seri Rosmah briefly appeared at the interview but Mr Najib said she would not take questions.

Nearly 300 boxes of designer handbags and dozens of bags filled with cash and jewellery were among the items taken away by police in raids at properties linked to Mr Najib's family. Items included Birkin handbags from the luxury goods maker Hermes, each worth up to hundreds of thousands of dollars.

Mr Najib said the public seizure of handbags and other luxury items created a negative perception but most were gifts given to his wife and daughter and had nothing to do with 1MDB.

"Yes these were gifts, particularly with my daughter's they were tagged, they were actually labelled: when, by whom," adding that a lot of them were wedding presents.

Mr Najib said his son-in-law Daniyar Nazarbayev, the nephew of Kazakstan President Nursultan Nazarbayev, also gave as gifts many of the handbags to Rosmah.

"People might find it hard to understand, but my son-in-law for example, he gets Birkin from his source, five or six at one go," he said. "His family has got some means, so it has nothing to do with 1MDB if it comes from Kazakhstan."

He also said RM114 million (S$38.6 million) found at his family home in Kuala Lumpur was party funds belonging to Umno, of which he was president until he stepped down shortly after the poll.

Umno was part of the Barisan Nasional coalition that lost the election.

US prosecutors have alleged that more than US$4.5 billion (S$6.1 billion) of 1MDB funds was laundered through a complex web of transactions and shell companies. 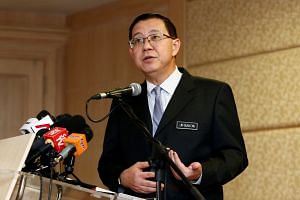 The US Department of Justice (DOJ) has filed several lawsuits to claim about US$1.7 billion in assets believed to have been stolen from 1MDB.

Some of the assets sought include a Picasso painting, luxury real estate in South California and New York, shares in a Hollywood production company and a US$265 million yacht, and more than US$200 million worth of jewellery - including a 22-carat pink diamond pendant and necklace.

Mr Najib said this jewellery set was also meant to be a gift for his wife but she never received it. "And until today we do not know... she says the item is not in her possession," Mr Najib said.

In the interview, Mr Najib for the first time also spoke at length about Low Taek Jho, a Malaysian financier better known as Jho Low.

US and Malaysian investigators have named Jho Low as a key figure who benefited from 1MDB funds.

Mr Najib said he felt that Mr Low's connections in the Middle East, particularly with Saudi Arabia and the United Arab Emirates, could be helpful in pulling in more investment to Malaysia from those places.

But he said he had never instructed Mr Low to get involved in 1MDB, and had no control over what he did.

"I didn't give him instructions, but he volunteered to do certain things, which he thought would help 1MDB. But whatever he did ultimately is the responsibility of the management and board."

Malaysia is seeking to arrest Mr Low, believed to be residing abroad, for his involvement in the 1MDB scandal.

He described Mr Low and Mr Najib's stepson Riza as friends but said he was not aware of any dealings involving 1MDB funds in Mr Riza's Hollywood production company, which produced The Wolf Of Wall Street, among other movies.

When asked if he was still in touch with Mr Low, Mr Najib said:"We have cut off communication again. I don't know where he is."

Mr Low's lawyer did not immediately respond to a request for comment.

Mr Najib has consistently denied any wrongdoing in 1MDB.

He has said US$681 million transferred into his personal bank account was a donation from Saudi Arabia, and not as US lawsuits have alleged misappropriated funds from 1MDB.

Mr Najib said he had been given assurances from the late Saudi King Abdullah bin Abdulaziz Al Saud that Saudi Arabia would be sending a donation.

"All I knew, I accepted at face value that this is coming from the Saudis, from King Abdullah at his behest, at his instruction," Mr Najib said.

Mr Najib said he had no knowledge of any transactions involving his personal account, as he had appointed Mr Nik Faisal Ariff Kamil, the director of SRC International, a former 1MDB unit, to manage it.

Malaysia's anti-graft agency has issued an arrest warrant for Mr Nik Faisal but his whereabouts are unknown.

The former prime minister said he is determined to stay in Malaysia and fight against the allegations, even if he faces the possibility of going to jail.

"No, I never had plans to leave. Because if I leave, there's presumption of guilt," he said. "I cannot be a fugitive for the rest of my life. I want to clear my name."