KUALA LUMPUR - Malaysia's Prime Minister Mahathir Mohamad has rejected an offer by Low Taek Jho to drop his claim to assets frozen by US authorities in return for immunity from prosecution over the 1MDB scandal, the Wall Street Journal (WSJ) reported, citing sources.

According to the WSJ, Tun Dr Mahathir turned down the offer through an intermediary.

Mr Low, commonly known as Jho Low, is the alleged mastermind of the multi-billion dollar money-laundering scandal at state fund 1MDB. He has said he was only an unofficial adviser to the fund, and denied any wrongdoing.

Mr Low is believed to be residing in Hong Kong, Macau and China.

According to WSJ, Malaysia does not have an extradition treaty with China but has been using back-channel communications with Beijing to seek Mr Low's return to Malaysia.

Dr Mahathir had earlier told WSJ that Malaysia's laws do not allow Mr Low's participation in the 1MDB scandal to be absolved in return for his cooperation in tracking down where the money went. 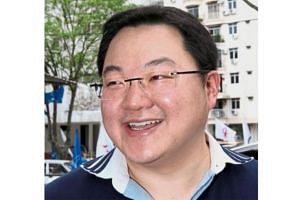 1MDB-linked Jho Low believed to be in Macau: Report

"I'm quite sure the kind of incentive he would readily accept is that he would not be prosecuted … But we can't do that. It's against the law. The law does not provide for what American law provides, plea bargaining and all that," Dr Mahathir had said.

The US-based publication also reported that Mr Low told his friends before Malaysia's May 9 elections that he felt safe because former Prime Minister Najib Razak was protecting him.

Datuk Seri Najib's coalition was ousted in the polls, and he is being investigated over his links to the 1MDB scandal.

Over the past month, Malaysia's anti-graft agency has raided residences linked to Mr Najib and questioned the former prime minister and his wife Rosmah Mansor over former 1MDB subsidiary SRC International.