SEMENYIH, MALAYSIA (THE STAR/ASIA NEWS NETWORK)- Former Malaysian prime minister Najib Razak is getting so used to being called "Bossku" (my boss) these days that he almost does not go by his name any more.

Whenever he makes an appearance in Semenyih, which he has on many occasions, Najib is greeted with shouts of "Bossku" and "Boss kita" (our boss).

"That has been my name in the past few days. Even when I go to the night markets, they don't use my real name," said Najib.

The Semenyih state seat in Selangor will be having a by-election next month.

Najib's new moniker has made him appear more accessible to more people, even non-voters.

"I shook hands with everyone, even the foreign workers. I know they can't vote for me but even they shouted Bossku," he said.

He was surprised to learn that anything associated with the Bossku catchphrase was enjoying commercial success. 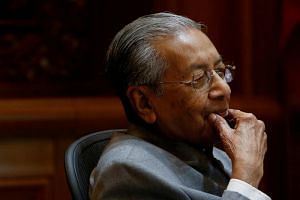 "I don't get the royalty or commission. I made a mistake. I should have patented the name but I forgot," he quipped.

However, Najib said he does not intend to profit from the phenomenon because he knows the real bosses are the people.

"If (former ruling coalition) Barisan Nasional (BN) comes back into power, we have to remember that the real bosses are the people and when we realise that, so malu apa (why should we be ashamed)?" he said.

At a rally in the Malay majority ward on Monday night (Feb 25), Najib criticised some of Pakatan Harapan's (PH) moves, which he said did not reflect the spirit of the new Malaysia.

He said this following talks that Putrajaya may replace the Department of Orang Asli Development director-general following PH's defeat in the recent Cameron Highlands by-election.

He also took a jab at PH's promise to abolish tolls, saying he was baffled that there was no charge for using tolls between 11pm and 5am.

"No charge should be applied when people are awake. Wouldn't you be asleep then? Even when you're awake at 5am, you'd be performing your morning prayers, not on the road. The manifesto said 'free tolls' but don't give it while people are asleep," he said, adding that the only ones that would benefit from the off-peak charges are ghosts, drunkards and sex workers. 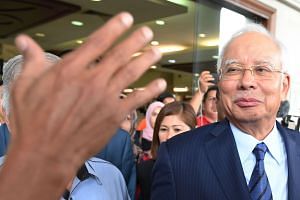 By contrast, he said when he was prime minister, he abolished several tolls including the Saga-Cheras, Shah Alam, Sungai Rasa and Batu Tiga.

All these tolls are located in Selangor.

"Abolish means abolish. Not only when people are asleep," he said.

He also said the congestion charge applied during peak hours should be done only when there is a more efficient public transport system.

Therefore, he reminded voters in Semenyih not to be hoodwinked any more and that they should give their support to BN.

"Send out a clear message that enough is enough. If they continue to hoodwink you, let them be accountable to you, the people," he said.

The Semenyih by-election was called after PH assemblyman Bakhtiar Mohd Nor died on Jan 11.

The Election Commission has set Feb 26 for early voting, while polling will be held on March 2.