NAYPYITAW (REUTERS) - Myanmar's Supreme Court heard on Tuesday (March 26) the appeal of two Reuters journalists imprisoned for breaking a colonial-era official secrets law, in a case that has raised questions about Myanmar's progress towards democracy.

Reporters Wa Lone and Kyaw Soe Oo have spent more than 15 months in detention since they were arrested in December 2017, while investigating a massacre of Rohingya Muslim civilians involving Myanmar soldiers.

A judge found the two guilty under the Official Secrets Act last September and sentenced them to seven years in prison.

Both remain separated from their young daughters. The wife of 32-year-old Wa Lone gave birth to their first child last year while Wa Lone was behind bars. Kyaw Soe Oo celebrated his 29th birthday in Yangon's Insein jail this month.

“We are expecting to reunite as a family as soon as possible,” Ms Kyaw Soe Oo’s wife, Chit Su Win, told reporters outside the Supreme Court compound in the capital, Naypyitaw, after Tuesday’s hearing.

Wa Lone and Kyaw Soe Oo did not attend.

Their convictions were heavily criticised by press freedom advocates and Western diplomats, putting additional pressure on Myanmar leader Aung San Suu Kyi, the Nobel laureate who took power in 2016 amid a transition from military rule.

Suu Kyi said in September, the week after their conviction, that the reporters' case had nothing to do with press freedom as the men had been jailed for handling official secrets, not because they were journalists. 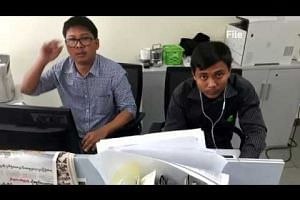 "Myanmar's Supreme Court has the opportunity to correct the serious miscarriage of justice inflicted on Wa Lone and Kyaw Soe Oo for the last 15 months," Reuters said in a statement.

"They are honest, admirable journalists who did not break the law, and they should be freed as a matter of urgency."

Outlining their grounds of appeal, the reporters’ lawyer, Khin Maung Zaw, cited lack of proof of a crime and evidence that the pair were set up by police.

During eight months of hearings, Wa Lone and Kyaw Soe Oo testified that two policemen they had not met before handed them papers rolled up in a newspaper during a meeting at a Yangon restaurant on Dec 12. Almost immediately afterwards, they said, they were bundled into a car by plainclothes officers.

A police captain testified that, prior to the restaurant meeting, a senior officer had ordered subordinates to plant documents on Wa Lone to "trap" the reporter.

The prosecution said the reporters were caught holding secret documents at a routine traffic stop.

Before their arrest, Wa Lone and Kyaw Soe Oo had been working on a Reuters investigation into the killing of 10 Rohingya Muslim men and boys by security forces and Buddhist civilians in western Myanmar's Rakhine State during an army crackdown that began in August 2017.

The operation sent more than 730,000 Rohingya fleeing to Bangladesh, according to United Nations' estimates.