NAYPYITAW (REUTERS) - A top Myanmar investment official on Tuesday (Jan 29) suggested alternatives such as scaling back or relocating a stalled Chinese-backed dam project that has strained ties between the neighbours.

Myanmar angered China in 2011 when its former quasi-civilian government suspended the US$3.6 billion (S$4.87 billion) Myitsone hydropower dam in the country's north amid environmental concerns.

Asked about the dam at an investment conference, Mr Thaung Tun, chairman of Myanmar's investment commission, listed several problems, from an earthquake fault line running under the project site to a large catchment area affecting residents.

"Catchment area would be twice the size of Singapore. This would mean that a lot of villages will have been displaced from their accessible land. That is the issue," Mr Thaung Tun told reporters at the conference in the capital Naypyitaw.

Mr Thaung Tun listed several alternatives, including scaling back the dam, moving it to a different location, or offering the operator an alternative project. He did not say if the government had a preferred option.

Myanmar had to consider its relations with China, its largest trade partner, and "was working hard to find the solution", he said.

Spearheading these efforts is a commission launched by Ms Aung San Suu Kyi's government, which came to power in 2016, to review the dam. 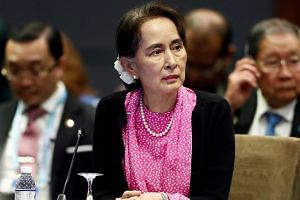 China offers Myanmar support over Rohingya issue after US rebuke

China’s Foreign Ministry said in a statement sent to Reuters that the dam was a “commercial cooperation project” already agreed upon by both countries and had been through a complete approval process.

“Relevant bodies and companies in China and Myanmar are in communication about this project, positively and appropriately handling problems that arise in the project’s cooperation process,” it said.

Finding a solution is critical for Ms Suu Kyi, who has benefited from Beijing's support at the United Nations following a 2017 army crackdown that drove 730,000 Rohingya Muslims out of the former Burma.

Mr Thaung Tun said original plans for the dam were not "thought out" and failed to consider the impact on the community and the environment.

The dam in the northern state of Kachin is very unpopular. Ms Suu Kyi's ruling National League for Democracy (NLD) lost a seat in Kachin by-elections last year and party officials have voiced concern about their popularity in ethnic minority areas ahead of the 2020 general election.

China's Yunnan province, the planned destination for about 90 per cent of the dam's electricity, now has a power surplus, Mr Thaung Tun said.

"There's no need for this dam now," he said.

On Monday, Nobel laureate Suu Kyi opened the first government-led investment conference by calling on global investors to put their money in Myanmar, seeking to offset the negative impact of the Rohingya crisis and slow pace of economic reforms.