Ms Suu Kyi touted Myanmar's economic potential, its attractive geographical location, expanding domestic markets and young population. She also listed some of the reforms undertaken by her government since coming to power in 2016.

"I stand here to reaffirm our commitment to continue our reform and to build an investment-friendly environment," Ms Suu Kyi said in the capital Naypyitaw, launching the first official investment conference hosted by her administration.

"Please do come to Myanmar, soak in an atmosphere brimming with opportunities and witness our new-found economic vibrancy with your own eyes," she told a crowd of business people, diplomats and journalists gathered at a conference hall.

While there were relatively few details on planned reforms, the conference itself could signal a shift in the government's approach to the business community.

Until now, investors have complained the government has focused largely on ending the country's myriad armed conflicts, neglecting economic reforms and their needs.

In her speech, Ms Suu Kyi did not mention the Rohingya crisis and the chilling impact it has had on investment. Many businesses worry that some of the Western sanctions that stifled the economy under army rule could be reinstated. 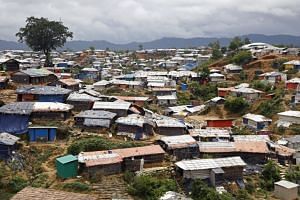 About 730,000 Rohingya Muslims have fled from western Rakhine State into Bangladesh since a military crackdown in 2017 after Rohingya insurgents attacked security posts.

A UN mandated fact-finding mission said that Myanmar's military carried out mass killings and gang rapes of Rohingya with "genocidal intent", and called for top generals to be prosecuted. Myanmar rejected the findings.

The International Monetary Fund said last year its data indicated that some foreign investors were delaying final approval of projects until there was clarity about how the situation may unfold.

The European Union is considering trade sanctions on Myanmar over the crisis, potentially stripping the country of tariff-free access to the world's largest trading bloc. The measures could include Myanmar's lucrative textile industry and potentially put thousands of jobs at risk.

Separately this month, the EU imposed tariffs on rice from Myanmar and Cambodia to curb a surge in imports.

Ms Suu Kyi did not mention the EU measures in her speech.

The World Bank said last month that it expected Myanmar's gross domestic product to fall to 6.2 per cent in 2018-19 fiscal year from 6.8 per cent the year before.

It saw "elevated downside risks from intensifying impacts of the Rakhine crisis", among other factors contributing to slowing growth.

Investors have credited the government's appointment of a new finance minister, Mr Soe Win, who has a background in international finance.

The government has also continued to reform the legal framework for investing and establishing companies, liberalising some of the junta-era restrictions on investment, and has created a bank of key projects it wants to implement.