KUALA LUMPUR - Malaysia's unpopular Education Minister Maszlee Malik has stumbled into another controversy, even as two new petitions at change.org called on the government to remove him.

In the latest controversy, Mr Maszlee has been slammed for saying the government would consider removing a pre-university quota system for Malays if the private sector employs more Malays, but which critics say are two distinctly separate issues.

The 44-year-old former academic has attracted the most number of controversies since becoming minister, and based on media reports, is by far the most unpopular Cabinet minister of the year-old government.

Malaysia is retaining its quota system for the pre-university programme referred to as matriculation, with 90 per cent reserved for the Bumiputera community which comprises largely Malays.

This has been criticised by other ethnic groups as Pakatan Harapan was voted into power to bring reforms, including moving away from race-based policies.

Mr Maszlee defended the quota system last Thursday at a public forum, saying: "If we want to change, if we say in 'Malaysia Baru' (New Malaysia) there is no need for a quota system and so on, then we must also make sure job opportunities are not denied to Bumiputera just because they don't know Mandarin."

Government MP Fong Kui Lun said the Mandarin requirement is needed in some jobs, and is "not unlike requiring jobseekers to have computer literacy or financial expertise", unlike the quota system that discriminates based on race. 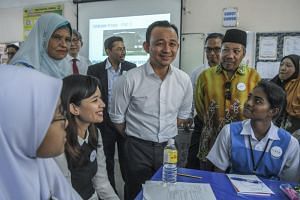 Several other government politicians joined in to ask for the quota system to be abolished.

Mr Maszlee, a first time MP and Cabinet minister, has often been criticised for straying away from his main job of improving education standards.

He has caused confusion and anger by saying all students should change their white shoes to black so these won't get dirty easily, is pushing to introduce cashless payment in schools, and is setting up petrol stations on five university grounds to encourage entrepreneurship. He also asked hotels to let their swimming pools be used by schools.

Last year, Mr Maszlee had to be told by the Cabinet to drop his presidency of the International Islamic University Malaysia. He was adamant for months that he wasn't doing anything wrong, though it was a Pakatan Harapan election promise not to have politicians as heads of universities in order to give them academic freedom.

"We are concerned that the Pakatan Harapan government will lose many of its votes because of this minister that you have appointed," according to a petition started by one Stephen Ng, which is addressed to Prime Minister Mahathir Mohamad. "We, therefore, urge you to give more thoughts to the complaints raised by the people. It is for the sake of the future generation of Malaysians". The petition has garnered more than 5,400 signatures.