BATU PAHAT (BERNAMA) - Parti Keadilan Rakyat (PKR) has promised that the e-ballot system adopted in the party elections in Kedah and Penang last Saturday (Sept 22) will be improved to ensure a smooth voting process in all states.

PKR political bureau chairman Mohd Rashid Hasnon said if the problem still remained unresolved, then it was likely that the election process would be conducted manually by crossing against the name of the candidate on the ballot paper.

The party had, for the first time, used an electronic voting system last Saturday in Penang and Kedah, but there was a glitch in the system and voting was disrupted, causing some unexpected incidents and postponements in some divisions.

Datuk Mohd Rashid was speaking to reporters after opening an Excellence in Motivation programme for SPM and STPM students at the Sekolah Jenis Kebangsaan Cina (SJKC) Chong Hwa on Sunday.

"We do not want the confusion and commotion that took place in Penang and Kedah to happen in other states.

"We also do not want members in other states to be discouraged from voting because of this (electronic voting) problem, although the system is supposed to take voting to a new level in showing that reforms are being made to the system of democracy practised in Malaysia," he said.

Mr Mohd Rashid said that the party had realised, after what happened, that it had to come up with a better and more efficient system. 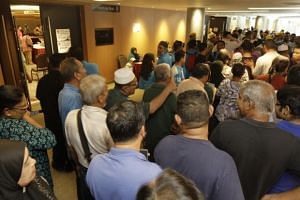 "It shows how important the simulation process should be to the new system to test its effectiveness.

"More simulation is needed if an area (division) has limited access and Internet connection," he said.