GEORGE TOWN (THE STAR/ASIA NEWS NETWORK) - Too much technology may not be such a good thing, if a Parti Keadilan Rakyat (PKR) election held on Saturday (Sept 22) is anything to go by.

For the first time, the party used an electronic voting system to choose its leader, but things did not go smoothly.

There was a glitch in the system, and voting was delayed by almost two hours.

"Kedah's 15 divisions and Penang's 13 divisions all logged into Bayan Baru. Stuck. All 28 voting stations are stuck," a party election officer said aloud to a crowd of glum-looking party members waiting for the voting to start at 10am.

It was supposed to start at 9am.

"No one can vote now. We are still trying to work it out. There is no sabotage, okay? Please, jangan fikir yang pelik-pelik (don't entertain strange thoughts)," he said.

The Bayan Baru PKR divisional elections were being held at the SPICE Convention Centre in George Town. The division has about 8,000 members. 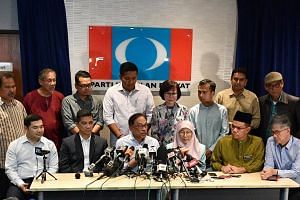 Bayan Baru MP Sim Tze Tzin, who was contesting the seat of divisional chief, said this was the first time the PKR used electronic voting instead of traditional ballot papers for an election.

"It is the money. It costs our party RM4 million (S$1.32 million) to print ballot papers nationwide. We are not a rich party, so we have to try using an online system, which doesn't cost as much to develop," he said.

Inside the Bayan Baru voting room, which the press was barred from entering, about 20 small tablets were made available for party members to cast their votes via an app.

Each tablet sat on a fashionable stand made from acrylic plastic so that users would not have to hold it.

Their votes will be tallied by a central server.

"It was so much easier using ballot papers," a party member huffed after casting her votes.

She said she had to vote for six committees, from the central committee right down to the women's youth wing.

"If you are used to apps, then I guess the app is idiot-proof. But for senior citizens, it can be difficult to use," she added.

Bernama reported that 55,132 PKR members from 13 divisions in Penang were eligible to vote on Saturday.

The results are expected to be known after 6pm.