KUALA LUMPUR - Malaysia's proposed law against fake news will see two amendments - to the definition of an offence and the maximum jail term - MPs were told at the Bill's second reading in Parliament on Thursday (March 29).

"Fake news is bad news... stories that have been fabricated or changed and spread without a conscious consideration of the impact it will have on people, will hurt the country," said de facto law minister Azalina Othman Said in her speech on Thursday.

Datuk Seri Azalina told lawmakers the maximum jail term for an offence under the proposed law will be reduced from 10 years to six. She also said that the amendment would make it a crime for someone to "maliciously" create fake news, instead of "knowingly" create fake news as set out in the original draft of the Bill.

These changes, she said, are in response to criticism from interested parties including members of the media, lawyers, non-governmental organisations and rights groups.

Ms Azalina said Malaysia was not alone in seeking a law to curb fake news, naming a slew of jurisdictions that were considering similar moves.

"In Singapore, a Select Committee on Deliberate Online Falsehoods: Causes, Consequences and Counter Measures was formed to study the problem of fake news, types of offenders and their motives in spreading false news, as well as the impact. This includes the possibility of having a new law to curb false news," she said, adding that Germany had passed its anti-fake news law.

The Bill was first read in Parliament on Monday by Ms Azalina, who said that the law is meant to "protect the people from fake news dumping and also from falling victim to fake news".

The debate will resume next Monday (April 2). 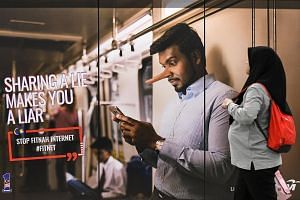 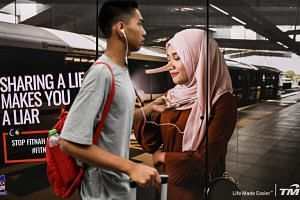 The Bill comes as the country gears up for a general election expected to be called within weeks, sparking claims from the opposition the new law will be used to muffle dissent.

The new law can be easily passed as it needs only a simple majority of the 222-member House, and ruling coalition Barisan Nasional has 131 MPs.

The Bill defines fake news as "any news, information, data and reports, which is or are wholly or partly false, whether in the form of features, visuals or audio recordings or in any other form capable of suggesting words or ideas".

The legislation allows for action against those who reproduce or replicate such content substantially with fines of up to RM500,000 or imprisonment of up to six years or both.

Those who publish "fake news" are to remove such content or face a fine of up to RM100,000, that can grow by up to RM3,000 for each day that the content stays up, after someone has been convicted.

Even those who are financiers to the propagators of "fake news" are liable for punishment.

Critics have questioned the haste to push the legislation through and its harsh punishments.

The RM500,00 fine is 10 times the fine imposed by other existing Malaysian laws governing the spread of false information.

The Bill also allows legal action to be taken against perpetrators outside Malaysia.

Malaysia's National Human Rights Commission in its statement on Thursday said it could not support the Bill as it has far-reaching consequences since the law in its present form could be used to exert government control over the media.

Its chairman, Razali Ismail said: "The implications of the proposed law can be enormous and can inspire an authoritarian form of government. The government's track record in utilising laws for reasons other than its intended purpose is arguably questionable."

On Tuesday, the Malaysian Bar said that the drafting of the proposed legislation raises "many questions regarding its content, intent and impact".

Media groups Wan-Ifra Media Freedom Committee Malaysia and Institute of Journalists Malaysia have also called for the Bill to be withdrawn or redrafted, saying it may stifle the media industry.