The Bill targets fake news, which has been defined as “any news, information, data and reports, which is or are wholly or partly false, whether in the form of features, visuals or audio recordings or in any other form capable of suggesting words or ideas”.

The Bill will be put up for a vote after a second reading in the current Parliament session, which ends on April 5. This should not pose any hurdles as only a simple majority is required to pass it.
The ruling Barisan Nasional government has 131 MPs in the 222-member Parliament. A minimum of 112 votes are needed to pass the Bill.
The Bill is controversial as it allows legal action to be taken against any individual in any country, irrespective of the individual’s nationality, as long as the content spread by that person relates to Malaysia or a Malaysian and is deemed false.
The legislation also allows for action against those who reproduce or replicate such content substantially.
Those who publish “fake news” are to remove such content or face a fine of up to RM100,000, that can grow by up to RM3,000 for each day that the content stays up, after someone has been convicted.
Even those who are financiers to the propagators of “fake news” are liable for punishment.
Last week, Deputy Communications and Multimedia Minister Jailani Johari said any reports regarding scandal-plagued 1Malaysia Development Berhad (1MDB) that isn’t verified by the government is “fake news”.
At a meeting on Monday (March 26) between Communications and Multimedia Minister Salleh Keruak and foreign media representatives, he said the law isn’t about politics.
“It (fake news) affects individuals, businesses. Not just politics. So we have to protect them,” said Datuk Seri Salleh. He said the proposed law was not related to 1MDB.
On paper, the Bill aims to deter the spread of fake news, particularly on social media platforms. But journalists and opposition politicians fear that it could be used to target them. 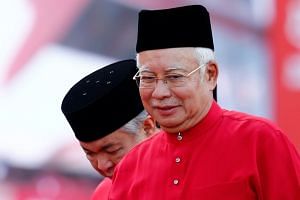 Bills on electoral map, fake news to be tabled in Malaysian Parliament

“This new law is more than just another layer of control by the government; it is a death blow to the sliver of democracy that we have,” said Steven Gan, editor-in-chief of Malaysiakini news site.
Cabinet minister Wan Junaidi Tuanku Jaafar told reporters that the upcoming law “is not aimed at silencing critics”.
But the Government has drawn some flak for including cartoons and caricatures under the “fake news” umbrella.
“The day our comedians and cartoonists, Parliamentary sketch writers and literary artists can be prosecuted for poking fun at public figures, you know that the government has lost the plot,” said human rights lawyer Andrew Khoo.
An appeal against the order to remove the publication is allowed, but not if the content is deemed to be “prejudicial to public order or national security”.
Those who share content on social media, knowing it is false, can also be punished - as can companies and their executives who commit offences.
The bill allows for negative information to be suppressed immediately, lawyers says.
“This allows comments to be immediately censored first, and then arguments about its truth entertained only later during trial,” said Mr Khoo.
The proposed punishment under the Bill is also significantly higher than under current laws on false information.
Under the Printing Presses and Publication Act and the Communications and Multimedia Act, the highest fine imposed is RM50,000 and imprisonment of up to three years.