KUALA LUMPUR - Malaysian police said on Tuesday (Dec 31) that a planned protest against Chinese education group Dong Zong by a Muslim student body is illegal as no permits were issued by the relevant authorities, MalayMail online news reported.

The Coalition of Malaysian Muslim Students, or Gamis, is planning to hold the march on Wednesday in downtown Kuala Lumpur, between historic Masjid Jamek and a popular mall widely called by its anchor tenant's name, Sogo.

Dang Wangi District police chief Mohd Fahmi Visuvanathan Abdullah said the protest would be in violation of existing rules. The protest's route would be within the Dang Wangi district.

"The peaceful protest is not valid. I have not received any notice from them regarding their assembly tomorrow," he said, as quoted by MalayMail.

"If they intend to march from Masjid Jamek to Sogo, they also need to have a written permission from the landowner; in this regard, it is the Kuala Lumpur City Hall (DBKL)."

Under Malaysia's Peaceful Assembly Act 2012, organisers of a gathering must notify the district police five days before the event. The organisers must also get approval from the relevant land owners to conduct the activity.

The planned pro-Jawi march is linked to the raging controversy over the introduction of khat, or Jawi writing, into Chinese and Tamil primary schools.

There are more than 1,200 Chinese and 523 Tamil primary schools in Malaysia, that use either Mandarin or Tamil as the medium of instruction.

Chinese educationist groups are at the forefront of opposing the move by the Education Ministry to introduce the basics of khat in vernacular schools, fearing creeping Islamisation and government interference in these privately-run schools.

But the meeting was dropped after police obtained a court order, following opposition to the congress by Malay groups that stoked racial tensions.

Khat, as Jawi calligraphy is called in Malaysia, is the writing of the Malay language using Arabic script. 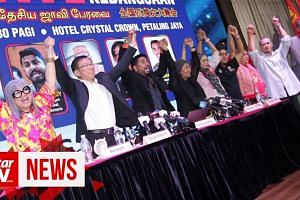 Older Malays see Jawi as an integral part of their Malay-Muslim culture as the writing was the predominant script for Malays until it was supplanted by Roman script.

Some Malays thus see the strong pushback by the Chinese schools as a rejection of a willingness to learn a bit of the culture of Malay-majority Malaysia.

Khat can be seen across the country on many road signs, state emblems and the ringgit currency.

While the Dong Jiao Zong forum was stopped, police allowed the National Jawi Congress organised by political activists to take place on Sunday.

The congress passed several resolutions, chief of which was calling on the government to put on hold the teaching of a Jawi calligraphy module in the vernacular schools.

The National Jawi Congress' spokesman Arun Dorasamy said more focus should be given on strengthening Bahasa Malaysia as the country's national language while upholding vernacular schools and mother tongue education.