KUALA LUMPUR - Police are closing in on the "alliance" behind the gay sex video implicating a minister, said Malaysia's Inspector-General of Police Abdul Hamid Bador.

"We have made several arrests (of people who spread the video) and some of them have been released," said Datuk Seri Abdul Hamid, as quoted by The Star newspaper.

"No (we don't know who is the mastermind yet), but there are hints of an alliance behind it," he said at a media conference at the Blok Melati police quarters in Keramat Wangsa Kuala Lumpur on Saturday (July 13).

Mr Abdul Hamid said the focus of the investigation "is on those involved in the production of the video and those responsible for circulating the video", according to Malay Mail online news.

“In this case, we have found evidence of a conspiracy and a plot by certain quarters in the production and circulation of the sex video implicating a minister (aimed) to topple someone," he said.

He added that action will also be taken against those involved in spreading the video, Malay Mail reported.

Mr Abdul Hamid was speaking to the media after attending a Hari Raya dinner function with about 800 of the residents at the quarters.

He said the police are still working on completing its investigation into the sex video, The Star reported. 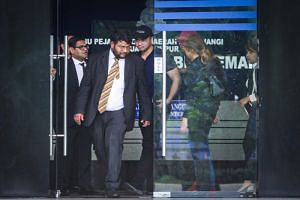 Behind Azmin's troubles, the postponed battle for Malaysia's soul

"Each time, it has been sent back for further investigation, the latest was on Thursday."

On June 12, Mr Haziq Abdullah Abdul Aziz, former Santubong Parti Keadilan Rakyat (PKR) Youth chief, made a confession on social media that he was featured in the videos and alleged that the other man was Economic Affairs Minister Mohd Azmin Ali.

Mr Haziq was detained at the Kuala Lumpur International Airport on June 14.

On June 19, Mr Haziq was slapped with a show-cause letter by the party disciplinary board and given 14 days to respond. A day later, the Ministry of Primary Industries announced that he was sacked from his post as the senior private secretary to the Deputy Primary Industries Minister.

Datuk Seri Azmin has denied any involvement in the sex video, dismissing the scandal as a "nefarious plot" to destroy his political career.