LANGKAWI (THE STAR/ASIA NEWS NETWORK) - Haziq Aziz had wanted to run for public office in the future but his dreams have been dashed following the recent sex video scandal.

His shocking admission that he was the man in the clip and his allegation that Economic Affairs Minister Azmin Ali was the other man has put a spanner in his political dream.

Furthermore, the Santubong PKR Youth chief has been slapped with a show-cause letter by his party over the controversy.

He was also sacked as senior private secretary to the Deputy Primary Industries Minister. The ministry viewed his admission as "of a sordid nature".

"This sex video scandal has affected my political dream but to what extent, I'm not really sure. But of course, in a bad way. For now, I have to forget about becoming a politician," he added.

Haziq felt it was tragic that he got dragged in a conspiracy to bring down Azmin politically.

"I'm a victim. I am not involved in the conspiracy and I have no idea who is behind it. I leave it to the police to investigate," he said.

"Of course, the Malay-Muslim community can't accept this kind of behaviour. But one thing is I admit - I did it. It was a mistake and the right thing to do was to confess," he said. 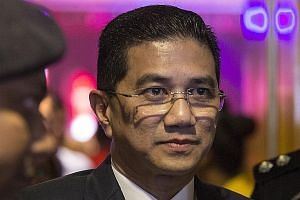 Anwar's aide says he is not behind gay sex video; Haziq sacked from ministry

"Just because I admitted that it was me in the video, how can you punish only one party when in fact the thing was done by two parties?" he asked.

Last Saturday (June 22), The Star talked to Haziq in Langkawi where he went to take a break from the ordeal. Here are excerpts of the one-hour interview.

Q: How did you and your family react when the sex video surfaced?

My family was very sad about this. On the day it went viral, my mum cried non-stop. My family was even afraid to leave the house (in Kuching).

Q: How did you react when the sex video came out?

I found out about the video at 8am when I woke up on June 11.

I was really shocked. At first, I thought that it was Azmin who recorded it because there is no way a senior minister's room could be ceroboh (intruded) by anyone. The security must be tight, right?

At first, I did not want to admit it was me. At first, I felt afraid as a personal thing about me went viral. I was thinking of menyorok (go into hiding). That is why I deleted all my social media accounts.

On June 11, Hilman (Idham, who is Azmin's political secretary) WhatsApp-ed me. He wanted to meet me. So, I asked where and he said Putrajaya Marriott. I waited for him for almost an hour before he turned up.

He basically asked me to deny it was me in the video. And he wanted to shoot my denial. I told him it is not in my nature to lie. It is not the right thing to do. Because of my refusal, Hilman got mad and he threatened me that within 48 hours he will finish it with or without me.

The thing that made me afraid was that Hilman showed me he had relations with SB (Special Branch), he got connections with MCMC (Malaysian Communications and Multimedia Commission), connections with powerful people. It was like he had control of government apparatus and I was very afraid.

After Hilman threatened me then I thought I better confess as he was willing to do anything for the sake of his boss.

Q: But wouldn't it have been better if you did not confess?

I was afraid that my fate would end up like Altantuya (Shaariibuu) or Kevin Morais. When people don't know about you, anyone can harm you.

Q: How come you looked cold in your video confession? And how come it looked like it was a deepfake and your father and friends even said it was not you?

After Hilman threatened me, I was very afraid. That is why I looked cold in the video.

Maybe, I also looked cold because the chair was big that I rested my arms on the sides and that's why I looked awkward. But it is me. Even MCMC told me at first, they thought it was fake. Then they told me after they did their forensic analysis that they found my (confession) video was not fake but real.

Q: Why, in your confession video, did you ask MACC (Malaysian Anti-Corruption Commission) to investigate Azmin?

Because there are allegations of his corruption together with the viral sex clips. Don't get me wrong - I was not saying the homosexual act is an act of corruption. That was not what I meant at the end of my confession video. Some members of the LGBTQ community felt offended because they thought I related the homosexual act with corruption.

Q: Aren't you afraid that you will go to jail because of your honesty?

Of course, I'm afraid. But it is an act of sukarela (consensual). I mean there is no victim in this case. I mean those who took the video, they should punish the perpetrator. But consensual between two adults, I think, it's not a crime.

Q: But as a lawyer, you know that homosexual sex and oral sex is a crime. Aren't you worried that you broke the law?

Of course, yes. I thought about that. But I had no choice. My safety and my life are quite important.

Q: What do you think the public would think when they watch the sex video? What feedback did you get?

Honestly, I have not read anything posted online. Because if there are negative comments, I don't want to become stressed.

Q: Why was there a video recording device in the room (at Four Points Sandakan)?

I am not sure because I felt that Azmin was the one who took the video for his own personal collection without my permission. That is why I was so mad.

Q: How's your life been in the last few days?

I don't have my phone now. I have thrown it away as I am afraid that someone will track me and kill me. I am very paranoid now.

So, I just stay in the house and watch TV and read books. Right now, I'm reading Francis Fukuyama's Identity: The Demand For Dignity And The Politics Of Resentment and watching Netflix's Peaky Blinders (a TV drama on a notorious gang in 1919 Birmingham, England).

Right now, I don't have a plan. But I can always go back to law practice in Kuching.

Q: When was the first time you met Azmin?

It was when I helped his campaign team in the PKR elections in 2014. Azmin was defending his deputy president's post against Selangor Mentri Besar Tan Sri Khalid Ibrahim. After Azmin won and became Mentri Besar, I helped him professionally at first and then our relationship started to be lebih rapat (intimate).

Q: What was your impression of him?

At that time, he was not very popular. If you remember people chopped him as having Umno DNA. We were against the norm by supporting Azmin. But we believed in his leadership and talent.

Q: But what was your personal impression of him?

He was a very charming guy and very interesting.

Q: How did it happen? Did you fall in love with him?

At first, we communicated using BBM (BlackBerry Messenger) because it was safer and more secure. We talked about party elections as I needed to report to him on what happened on the ground. But after the polls was over, we talked about casual things. And then I started to feel that he was homosexual when he gave hints. This was in 2016 when he was already Selangor Mentri Besar.

Q: Are you gay or bisexual?

Q: Did you ever have a girlfriend?

Q: Why did people say that the lovemaking in the video was not passionate?

Because Azmin is the type of man who likes to be served - he's the master. I guess that is his fetish. He is a political master; he is someone powerful - so he wants the guy to do it to him.

Q: Why was there no reaction on his face?

Q: Are you with Pakatan Harapan or with Barisan Nasional?

Let me clear this. I joined the Perdana Fellowship programme as an intern to Nancy Shukri. (Datuk Seri Nancy Shukri, who was a Minister in the Prime Minister's Department during the Barisan Nasional administration). Deep in my heart, I am still a PKR member. In fact, I never joined any of the BN component parties. About the allegations that I was planted by BN to do all this, if I am a BN Trojan horse, I would have lodged a police report right after we had sex at Four Points Sandakan or Hyatt Regency KL or during the 2018 PKR polls when I met Azmin at Pullman Kuching.

Q: Is this sex video about the fight for the Prime Minister's post?

I never thought about that. I don't see how it can give any advantage to whoever aspires to be the next Prime Minister.

Q: Who do you think would be the next PM?

Q: Who do you think is behind this sex video?

I don't have any idea. Even the police still have not come up with any conclusion.

Of course, in a way it will. In fact, PKR is divided now between two factions.