"I hope the friendship between us can be improved and maintained, because there are mutual benefits if Indonesia and Malaysia work together in all areas, including politics, economy and bilateral relations," he said on Friday (June 29) in Bogor, West Java.

He added that both countries face similar problems, such as the EU plan to phase out the use of palm oil in transport fuels from 2030, a move that will hit major palm oil producers like Indonesia and Malaysia hard.

"Now this is threatened by the European Union, and we need to work together against their campaign that (our) palm oil is obtained from deforestation... this is not true at all," said Tun Dr Mahathir.

"We all can remember when Europe was once covered by forests as well, but they've all been cut down, and we've never protested against them," he added. "But when we need more land for oil palm, they accuse us of damaging the environment."

Dr Mahathir was speaking at a joint press conference with President Joko Widodo at Istana Bogor after they met for bilateral talks earlier.

The Prime Minister is on a two-day visit to Indonesia, his first to a fellow Asean member state and only his second overseas trip since taking office again following his surprise victory in the Malaysian general election on May 9.

Dr Mahathir, who has yet to appoint a foreign affairs minister, was accompanied by his wife, Tun Dr Siti Hasmah Mohamad Ali, and several government officials.

"Indeed, our overseas tour begins in Indonesia, because it is the closest country and one with familial relations, said Dr Mahathir. "Malaysians are not foreigners to Indonesians."

In that same year, Malaysia's total investment value in Indonesia reached US$1.2 billion. More than 2.5 million Indonesians live in Malaysia. 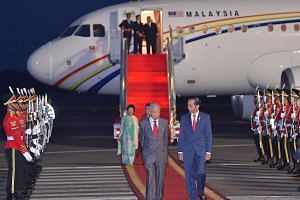 Mahathir in Jakarta on official visit

Indonesia rolled out the red carpet to welcome the 92-year-old premier, who was received by President Joko and First Lady Iriana at the Halim Perdanakusuma International Airport in East Jakarta on Thursday evening.

Dr Mahathir on Friday inspected a guard of honour at Istana Bogor, before being greeted by hundreds of children waving the Indonesian and Malaysian flags. He and Mr Joko also planted a tree in the presidential place before they held talks.

The President, in his opening remarks on Friday after his meeting with Dr Mahathir, said it was an honour for Indonesia to be the first Asean state the Prime Minister chose to visit after returning to power.

Mr Joko related his own visit to Kuala Lumpur in 2015 when he was invited by Dr Mahathir to test-drive a Proton car with the Prime Minister. "But I was not afraid, I was not worried because the driver was Bapak Tun Mahathir, if it was not him, I think I'd be afraid."

Dr Mahathir said a previously shelved joint project between Malaysia and Indonesia to produce an Asean car could be revived following the bilateral talks. Dr Mahathir said the effort was agreed on in 2015 but failed to take off then.

President Joko said both he and Dr Mahathir remain committed in the fight against corruption and saw the importance of connectivity while having solutions to border-related issues.

The two countries had in 2017 agreed to resolve their maritime and land border issues, which include their overlapping demands over Ambalat, located between Indonesia’s Sulawesi island and Sabah, Malaysia.

These overlapping claims escalated in 2002 due to differences in boundary maps used by both countries, but Dr Mahathir and Mr Joko on Friday pledged to solve the issue together.

“We decided that this problem cannot be (resolved) alone, but we have already started the approach and we need to accept that Indonesia and Malaysia must cooperate, like how Malaysia is cooperating with Thailand, where we have a joint development area,” said Dr Mahathir.

They also discussed how more can be done to protect the Indonesian workforce in Malaysia, the development of schools for Indonesian children in the country, as well as the ongoing territorial disputes in the South China Sea, where Malaysia has conflicting claims with China.

The two leaders attended Friday prayers together at the Baitusallam mosque in the presidential palace before Mr Joko hosted the Malaysian delegation to an official luncheon in honour of the Prime Minister.

Dr Mahathir's trip comes after his visit to Japan earlier this month, when he attended a conference and met his Japanese counterpart Shinzo Abe.