KUALA LUMPUR - Malaysia's Defence Minister Mohamad Sabu said on Saturday (Jan 5) that his son was picked up by the police after testing positive for drugs.

And he wants the 31-year old man to be dealt with by the law.

"Following this arrest, my family and I leave the matter entirely up to the authorities to act in accordance with the process of the law," he said.

It was learnt that Ahmad Saiful was picked up by a combined team involving the Dang Wangi Narcotics Crime Investigation Department and its Secret Society, Gaming and Vice Division, The Star newspaper reported on its website.

The raid was conducted early on Saturday along the Jalan Ampang area, one of Kuala Lumpur's major thoroughfares that has many nightspots and restaurants.

Sources close to the investigation confirmed that Ahmad Saiful tested positive for marijuana.

He was among the 101 people that were inspected during the anti-vice raid, The Star said. 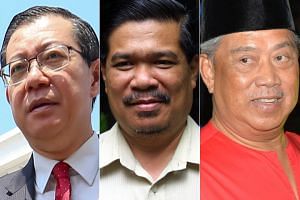 It was known that he was among two persons who were detained for testing positive for the drug.

The case is being investigated under the penal code for drug abuse. Not much is known about Ahmad Saiful.

His father, on the other hand, is a popular politician in Malaysia.

Mr Mohamad is president of Parti Amanah Negara, one of the four factions that made up the ruling Pakatan Harapan (PH) coalition.

Amanah is a moderate Islamic party, formed in 2015 after a group of leaders broke away from conservative Parti Islam SeMalaysia (PAS). Mr Mohamad was deputy president of PAS.

He was named Defence Minister by Prime Minister Mahathir Mohamad four days after PH won the general election on May 9 last year.