KUALA LUMPUR (THE STAR/ASIA NEWS NETWORK) - Malaysia's Finance Minister Lim Guan Eng not only stands by his allegations that the previous government had falsified the Goods and Services Tax (GST) credit refund, but also claims that the missing amount is even larger than what he had declared in Parliament last week.

"The actual amount of shortfall in the fund for unpaid GST input tax is RM19.248 billion (S$6.5 billion), and not RM17.911 billion which I had reported to the House last week," Mr Lim said in Parliament on Monday (Aug 13).

Mr Lim said a ministry officer had misplaced a decimal point, which led to the error. "It was announced last week that the available funds is approximately RM1.48 billion. However, the real figure is around RM148.6 million," he said.

"It is better that we are transparent and honest with the House than to hide such things, as done by the previous government," he added.

He maintained that the problem of unpaid tax was due to the weak cashflow of the previous administration, brought about by poor fiscal discipline and an increase in large debts.

"What the previous government had done was the falsifying of accounts and abuse of the fund to make payments for other purposes, or to cover the deficit to show a surplus. This is still the truth," he alleged. 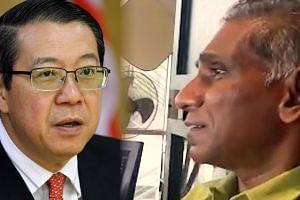 Last week, heated exchanges took place between Mr Lim and opposition lawmakers when he alleged that funds meant for GST tax refunds had gone missing from government coffers and were used for other purposes.

Mr Lim said that his ministry would carry out an internal probe to determine what happened to the money meant to repay businesses under the GST system.

Rembau MP Khairy Jamaluddin has since lodged a report with the police over Mr Lim's claims.

"There are no missing funds. The Treasury allocates to the GST trust account for refunds based on the requirement of the Customs Department and financial position of the government. The information is available in the Accountant-General's Department and Fiscal Division of the Ministry of Finance," Tan Sri Irwan said, according to Bernama.