Tan Sri Irwan had on Thursday denied those claims by Finance Minister Lim Guan Eng, who said in Parliament on Wednesday that the sum, meant for goods and services tax (GST) refunds, had gone missing under Dr Irwan's watch.

Dr Irwan said he made the report so that the Malaysian Anti-Corruption Commission (MACC) could investigate the matter, which he claimed was “baseless”.

Mr Lim "claims the money is missing. It is not. It was put into the consolidated funds. I made the report because I want the truth”, he told a reporter.

Welcoming an investigation into the matter, Tan Sri Irwan explained on Thursday that the Customs Department requirements for GST refunds are channelled to a trust account every month.

He said the amount allocated is decided at the monthly Federal Government Cashflow Management meeting, which is chaired by the Treasury secretary-general and also attended by the director-general of Customs Department, and officials from the Inland Revenue Board, the Finance Ministry and the central bank.

"There are no missing funds. The Treasury allocates to the GST trust account for refunds based on the requirement of the Customs Department and financial position of the government. The information is available in the Accountant-General's Department and Fiscal Division of the Ministry of Finance," said Dr Irwan.

This procedure, he said, was provided for in the Financial Procedure Act 1957.

He was responding to allegations made by Mr Lim in Parliament on Wednesday that about RM18 billion was missing from the RM19.4 billion meant for GST refunds from April 2015 to May 31, 2018.

Citing an example of GST refunds for 2017, Dr Irwan said the Customs Department paid claims totalling RM23 billion or 34 per cent from the GST proceeds. Refunds were paid within 14 days if the claims were straighforward. 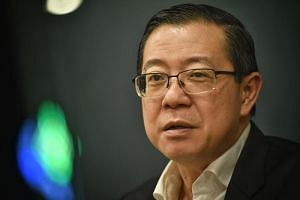 Malaysia's Parliament repeals GST, set to replace it with SST in September

He said it was understood that there was RM15 billion worth of outstanding claims for last year that needed verification, investigation and auditing to ensure there was no fraud or false claims.

Dr Irwan, who was removed from office days after the Pakatan Harapan coalition won the May 9 election, said he was prepared to extend his cooperation if the government needed information on the matter.

He said he had no plans to lodge a police report over Mr Lim's statement linking him to the allegation of missing funds.

"He (Mr Lim) alleged that the previous government had robbed RM18 billion in GST refunds. This implies that a crime has been committed and when I asked the Finance Minister if any action would be taken, he said an internal investigation would be carried out. I don't think that is sufficient which is why I lodged a report with the police today," the Rembau MP told reporters.