KUALA LUMPUR (THE STAR/ ASIA NEWS NETWORK) - The police in Malaysia are aiming to put a full stop to the "moderate at best" English in the force.

This follows a recent directive by Prime Minister Mahathir Mohamad for senior civil servants to master the language.

Inspector-General of Police (IGP) Mohamad Fuzi Harun, who welcomed the Prime Minister's directive, said the police had conducted such courses in the past.

"So, the order from the PM is timely. We have planned intensive English courses, both written and in communication skills, for officers and other personnel," he said after launching a Professional Communication Special English Course at the Police Training College.

The course, which covered 30 senior officers so far, will be expanded to all 14 police training centres nationwide.

Officers would be told to speak in English at certain meetings or briefings, Tan Sri Mohamad Fuzi added. He held the press conference in English.

"We will study the possibility of making it compulsory for a pass in English for new intakes, but this will be subject to approval from the Federal Government," he added.

The number of English Language courses that will be held depends on available funds.

"We have qualified English teachers in the force, but we may seek external trainers as well," he added. 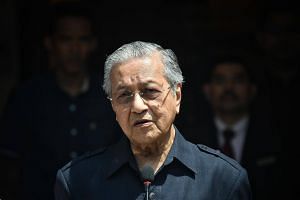 On a separate matter, the IGP urged members of the public to provide information on illegal gambling in the Klang Valley.

"We recently set up police hotlines for the public to provide tip-offs on illegal gambling. But we appeal for more support," he said.

Conceding that responses in Klang Valley have not been encouraging, IGP Muhammad Fuzi said the war on illegal gambling could be won only if the police and the public worked together.

"We have transferred a few OCPDs for unsatisfactory performances over illegal gambling. Rest assured, more OCPDs will be subjected to the same action if they are not serious," he said.