"For Malaysia to grow, we need to have a strong manufacturing industry and continued innovation. We can't have these unless we have enough engineers, IT experts and scientists," said Adrian Chan, a post-graduate student at Warwick University in Britain.

"Based on a survey done by the Programme for International Student Assessment (Pisa) in 2011, even Thailand is ahead of us."

"Our Asian neighbours such as Singapore, South Korea, and Hong Kong are leaders in Pisa's Maths and Science scores. My wish is to see Malaysian students able to catch up and compete with them."

"Since technology advances quickly, we should use e-learning for these subjects rather than textbooks. 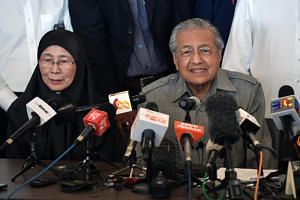 "Books can be outdated by the time they are published. For example, primary school Information Technology books still talk about Microsoft Office 2010 while Office 2019 is about to be released soon," he said.

Lim, who obtained a scholarship to study in the National University of Singapore's High School of Math and Science, said computers in school labs should also be updated to the latest operating systems.

He said teaching methods should also be improved.

"Based on my experience, most students who learn how to use software in primary and secondary school often just blindly follow instructions from the textbook.

"Some cannot complete the tests and homework without the textbook. This shows that the current teaching method is ineffective and should be improved," he said.

He said he had high hopes for education in Malaysia and expected the new Prime Minister to be the "Father of Modernisation 2.0".

Lim is a self-taught coding wizard who has already developed more than 50 apps.

Other Malaysians have called out for the return of English as the medium used to teach Science and Mathematics in schools.

Facebook user Christopher Ng said that the two subjects must be taught in English, while acknowledging that Bahasa Malaysia must remain as the nation's official language.

"Science and Mathematics must be taught in English and English only," he said.

At the same time, Ng also said that the government must upgrade the existing English, Science and Mathematics syllabus for both primary and secondary school level.

He had also called out for the abolishment of examinations for Pendidikan Sivik (civic studies) and Pendidikan Moral (moral studies) in schools.

Facebook user Ariv Chelvam said that the level of English must be improved drastically in all public schools.

"The Form 5 English textbook is hilarious!"

He added that vernacular schools should be abolished, saying that this will ensure that racism is curbed at a young age.

"A one-school system will show the world what happens when you put bright minds together."

Similar sentiments were expressed by Facebook user Zhi Xuan Lee, as she proposed that existing vernacular schools be transformed into national schools.

She said that Bahasa Malaysia and English should remain as mandatory subjects and added that a student should master an additional language like Mandarin or Tamil along with the first two compulsory languages.