KUALA LUMPUR (THE STAR/ASIA NEWS NETWORK, REUTERS) - Police raiding Malaysia's former Prime Minister Datuk Seri Najib Razak's house in an upscale neighbourhood in Kuala Lumpur have been attempting to break into his safe by drilling through it on Thursday (May 17).

Datuk Harpal Singh, lawyer of Datuk Seri Najib, said a police team began drilling into the safe at 8.30am.

Mr Harpal said that the safe was found in a room on the first floor of the residence, adding that the drilling had to be done as the key has been misplaced.

He said that the drilling had continued past 5pm and that the safe has not been opened in two decades.

Police began on Wednesday (May 16) searching Mr Najib's private house in Taman Duta and four other places linked to him in connection with an investigation into the scandal-plagued state fund 1Malaysia Development Berhad (1MDB).

Police entered the house late on Wednesday, an extraordinary scene that thousands watched unfold as it was streamed live. Few would have predicted such a scenario before a May 9 general election that he was expected to win.

Mr Amar Singh, the director of police commercial crime investigations, told Reuters that searches were being carried out at the home, at the prime minister's office and a residence he had used, as well as two apartments owned by his family.

"We are in the midst of collecting information, we will have more details once we have completed our search," he said, confirming that the searches were related to investigations into the 1MDB scandal that had dogged Mr Najib since 2015.

Authorities in at least six countries, including the United States, are investigating the multi-billion-dollar scandal over the fund that Mr Najib founded. 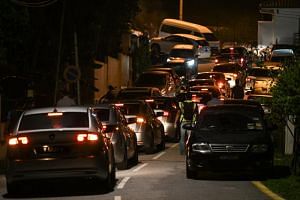 Mr Najib has denied any wrongdoing.

Mr Harpal, the lawyer, said the police search had gone on for almost 18 hours and was "harassment".

Mr Najib had indicated he was "prepared and willing to extend his fullest cooperation" to authorities but their long presence and the drilling open of a long-unopened safe suggested"unwarranted harassment", Mr Harpal said.

The lawyer said police had found "nothing incriminating" but took away some personal items, including handbags and clothing.

Mr Harpal also criticised the timing of the raid, saying that Mr Najib's family and staff were unable to properly conduct their religious obligations prior to the opening of fast on the first day of the holy Muslim month of Ramadan which falls on Thursday.

"The ongoing cordoning of the road has caused severe inconvenience and annoyance to his neighbours who are using the same road on a regular basis," he added.

Asked if police would arrest Mr Najib, Mr Harpal said: "There is no indication that they will do it."

A police truck packed with big, blue boxes left the compound of the house on Thursday afternoon, a Reuters witness said. There was no immediate word on what was in the boxes.