SINGAPORE (REUTERS, BERNAMA) - Malaysian Prime Minister Mahathir Mohamad said on Thursday (Aug 30) there is "some" plan to build a third link with Singapore, amid reports that the southern state of Johor was in talks to build a bridge that could be completed in three or four years.

Singapore is currently linked to Johor via a very busy Causeway to the north and a bridge from Tuas, the western part of the island state.

Asked about a plan to build a third link, Tun Dr Mahathir told reporters in Kuala Lumpur: "There is some plan in the offing... there is already some plan."

He did not provide any further details.

“We have not received any official proposal or communications from Malaysia regarding a third link between Singapore and Malaysia,” a Singapore Ministry of Transport spokesperson told Reuters late on Thursday.

Malaysia's The Star newspaper quoted Johor Menteri Besar Osman Sapian as saying that the state government was in talks with a company about the third-link project, which could be built in the next three to four years.

Datuk Osman said the proposed bridge – which would start from Pengerang near Kota Tinggi and end at Singapore's Pulau Ubin island – could help ease traffic congestion on the two existing land links between the two countries.

"Yesterday, I had a discussion with interested parties about the possibility of a third link from east Johor. We observed that the area was close to Pulau Ubin - they were only about 3km apart," Mr Osman told reporters.

Mr Osman said it was likely that the link would have a different customs and immigration system from the one used at the Causeway and the Tuas Second Link.

"We may use a new system. It could be that Singapore's and Malaysia's immigration checks will be conducted just once either in Pengerang or in Pulau Ubin," said the minister.

The project was still at the research stage, he added, and findings would be presented to the federal government to be studied. 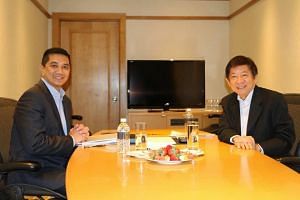 Mr Osman also commented on the RTS link, saying that the project would likely begin in the third quarter of 2019.

Dr Mahathir's comment comes after he took aim at a series of infrastructure projects with China and with Singapore that had been pushed by his predecessor, Najib Razak, whom he drove from office in a surprise election victory in May.

Dr Mahathir has suspended plans for a high-speed rail link from Kuala Lumpur to Singapore.