JOHOR BARU (THE STAR/ASIA NEWS NETWORK) - Johor's Ruler has described the second case of chemical pollution in Pasir Gudang district as "despicable and a total disgrace", and taken state and federal agencies to task over the matter.

Sultan Ibrahim Sultan Iskandar said he would be summoning the leaders of state and federal bodies to answer for these incidents, which took place in the same area and in the same state within a couple of months.

"We were assured that all was all right and we heard the politicians and officials issuing us assurances but barely three months later, the people of Johor are faced with this issue again," he said. "This is despicable and a total disgrace."

The sultan said the latest incident clearly showed "complete flaws and weaknesses, if not incompetence" in the state and federal disaster management systems.

He said he did not want to be told that such incidents would not happen again, adding: "I do not want to be hoodwinked again and again by empty assurances."

The visibly upset Sultan Ibrahim said he found it hard to accept that two pollution-related incidents could happen in the same place, albeit from different sources, within a mere three months.

In an interview with The Star, he said the people of Pasir Gudang were badly affected by these incidents, as the earlier chemical dumping, which resulted in methane gas spreading through the air, had forced almost 4,000 people to seek treatment at hospitals in March. 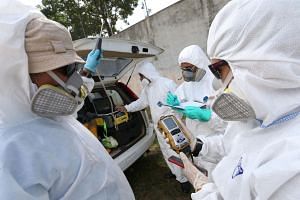 In the latest case, 475 education institutions in Pasir Gudang - 111 primary and secondary schools, three higher education institutions, 14 private and international schools and 347 private kindergartens registered with the state Education Department - were ordered to close for three days this week.

To date, more than 100 students from over 30 schools have been affected by the latest incident, which first hit on June 20.

"I read that the state government spent about RM6.4 million (S$2.1 million) to clean up the Sungai Kim Kim river of the toxic waste in March.

"Then, we have conflicting statements from a minister who first affirmed that the latest incident was related to the earlier case in Sungai Kim Kim but later denied it.

"These are very confusing and conflicting statements to me, as they should be speaking authoritatively on such an important matter," he said, insisting that the officials should carry out their jobs competently and effectively.

Sultan Ibrahim said he would propose to the Johor government to "get rid of or relocate" industries that had negative environment impact on the state, saying that "they endangered not just the people of Johor but also Singaporeans".

He cited a plastic manufacturer that was allowed to operate in Johor "when other states did not want it".

"I don't care about the so-called economic value of these toxic industries, as I am only concerned about the health of Johoreans. That is far more important than money," he said. 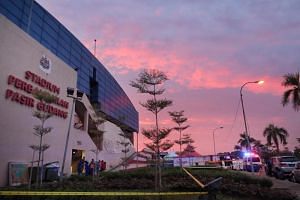 "I don't want the politicians, whether state or federal, to tell me about the economic impact. Please stop these," he added.

It has been reported that the authorities have narrowed down the list of suspected polluters to 30 chemical factories, and the order is out to find the main polluter.

Menteri Besar Sahruddin Jamal said he had directed the Department of Environment and other agencies to find the main culprit.

This is the second time in three months that the authorities have ordered all schools in Pasir Gudang district to be closed due to pollution.

In March, all 111 primary and secondary schools were also ordered to close because of toxic fumes coming from Sungai Kim Kim.

Four individuals, including two Singaporeans, have been charged in the Sessions Court for their alleged involvement in the case. Three of them are directors of a used tyre processing company and the other is a lorry driver.

Sultan Ibrahim also advised the politicians, at both the state and federal levels, to "focus on serving the people, and not be busy politicking aimlessly and endlessly at the expense of the people of Johor".

"Let me tell them frankly, the people are sick and tired of their politicking. Just do your work and don't make others scapegoats or try to distract from issues that really matter such as the economy and well-being of the people," he said.