JOHOR BARU - Johor's Sultan Ibrahim Sultan Iskandar plans to team up with a major hypermarket to sell goods at prices lower than the market rate in the southern Malaysian state.

Making the announcement on Facebook on Thursday (March 28), the ruler, who is currently on a private trip in the Middle East, said he is planning to have a "strategic cooperation" with a hypermarket.

He said the hypermarket has given its "guarantee" that it will be able to price its items at a rate that is 10 per cent lower than others.

At the same time, the hypermarket also assured him that the items sold will be of high quality.

"This will enable the people, especially those from the lower-income group, to get their daily necessities at a cheaper price," Sultan Ibrahim was quoted as saying by the Royal Press Office.

He did not name the hypermarket but said more information on the matter will be announced soon.

The 10-month-old Pakatan Harapan government is facing public anger as it has failed to rein in household costs despite removing the unpopular 6 per cent goods and services tax (GST), a broad-based tax, and replacing it with a narrower sales and services tax. 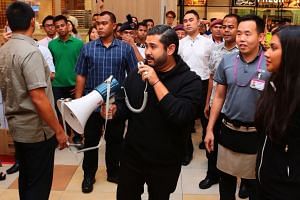 Pandemonium ensued as shoppers grabbed up to three trolleys each and rushed to fill them after the Crown Prince offered to foot the grocery bill for every shopper there, to the tune of RM3,000 each.

The store was forced to bring down its shutters after being overwhelmed by crowds as news of the prince's largesse spread and later embarked on a massive clean-up and replenishing exercise.