JOHOR BARU (THE STAR/ASIA NEWS NETWORK) - The supermarket where the Johor Crown Prince spent RM1 million (S$338,000) for other people's groceries struggled to reopen on Thursday (April 12) as workers rushed to replenish empty shelves and clear up abandoned trolleys.

The Aeon Tebrau store in Johor only opened at around 12.45pm on Thursday, after Tunku Ismail Sultan Ibrahim paid a surprise visit on Wednesday night and offered to foot the grocery bill for every shopper there, to the tune of RM3,000 each.

Pandemonium ensued as shoppers grabbed up to three trolleys each and rushed to fill them. The crown prince, who was at the mall for less than five minutes, reportedly spent over RM1 million on the spree.

The prince made the supermarket visit just days after he was heavily criticised on social media for his comments on the Facebook account of his football team that appeared to support the ruling Barisan Nasional coalition.

Many people pushed back to say that he should stay out of politics, and that he might not be able to feel the pain felt by many Malaysians due to the high cost of living, including the rising prices of daily goods. Cost of living issues, which many blame on the government's imposition of the 6 per cent goods and services tax from April 2015, is a key campaign issue as Malaysia heads towards polling day on May 9.

At Aeon Tebrau on Thursday afternoon, only the vegetable and fish sections were open to the public while the remaining sections were still off limits to shoppers. Workers were seen replenishing stock.

Pictures posted on social media on Thursday appeared to show dozens of trolleys heaped with goods abandoned at the supermarket's cash tills. The store had brought down its shutters at 8 pm on Wednesday, after being overwhelmed by crowds when news of the prince's largesse spread.

According to the New Straits Times, many of the abandoned carts were filled with perishables like ice cream, dairy products and other fresh food, which were no longer saleable. They were left behind after the store shut at 10 pm.

A member of staff told the newspaper they were busy removing the spoiled food and cleaning up the mess.

A worker at a nearby shop, who only wanted to be known as Jessica, said it was a crazy experience for her on Wednesday night.

"I was in the midst of closing down the shop at around 9.30 pm when people kept on coming to the supermarket despite it being closed." 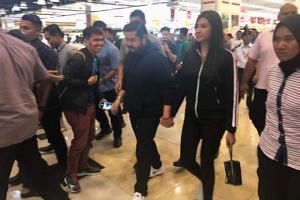 Businessman Mohamed Amirul Zainal, 33, said that he left the supermarket hugely disappointed as most of the items he wanted to buy were out of stock.

"I came to the mall to meet a friend and my wife told me to buy groceries at the supermarket instead of going elsewhere, but the items that I wanted to buy such as rice and toiletries were out of stock," he said.