JOHOR BARU - Students from another school in Johor on Sunday (June 23) were suffering from breathing difficulties, days after at least 15 people were treated for similar symptoms in the Malaysian state's latest air pollution incident.

Bernama news agency reported that students from SMK Taman Nusa Damai in Pasir Gudang were the latest to be affected by the incident.

The school is located about 5km from Sekolah Agama Taman Mawar whose students were among those who suffered breathing difficulties and vomiting on Thursday (June 20).

According to Bernama, at least six ambulances were seen in the SMK Taman Nusa Damai compound, although it was unclear how many were affected.

It said some of the victims were taken to Pasir Gudang Municipal Council Indoor Stadium, which had functioned as a monitoring Operations centre for the previous cases, for early treatment.

The Star reported earlier that the Johor government was still uncertain what had caused the incident and were investigating the matter.

"We do not know why the students suddenly feel nauseous and fainted," Datuk Sahruddin told reporters on Sunday.

"However, we hope to get a clearer picture over what really happened when we obtain the blood test results by Monday (June 24)," he added.

It was reported that the state government had ordered three schools and two kindergartens in Taman Mawar in Pasir Gudang to be closed for two days from Sunday.

In addition to Sekolah Agama Taman Mawar and SK Pasir Gudang 4, another school, SMK Pasir Gudang 2, as well as kindergartens Tadika Pasti and Tadika Pintar Bistari have also been ordered to be shut. 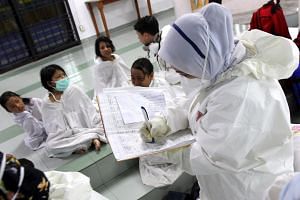 Dr Sahruddin also said on Sunday that the state government would also be discussing with the Federal Town and Country Planning Department to set up a committee to study the location of residential and industrial areas.

"This committee will study the residential and industrial areas in Pasir Gudang, as they are located nearby one another," he said.

In Kuala Lumpur, Health Minister Dzulkefly Ahmad told reporters that another two students from Sekolah Agama Taman Mawar had been admitted to hospital after suffering breathing difficulties but were in stable condition. This brings the total number of cases to date from the school to 18.

State Health, Culture and Heritage Committee chairman Mohd Khuzzan Abu Bakar said on Saturday that the move to shut the schools involved some 3,000 people, but that it would be necessary.

He also said the air quality readings recorded by the authorities over the previous two days had showed it to be normal but will be monitored until Monday.

In March, the toxic pollution in Sungai Kim Kim resulted in more than 4,000 people falling ill.