JAKARTA (REUTERS) - The head of Indonesian President Joko Widodo's re-election campaign said on Wednesday (Feb 27) that supporters should not be complacent about the incumbent's lead in opinion polls, given the high number of undecided voters and the threat of fake news.

Mr Joko enjoys a double-digit lead over retired general Prabowo Subianto in most opinion polls ahead of the April 17 election, which is a repeat of the bitterly fought race in 2014.

"Right now we need to focus on undecided voters," said Mr Erick Thohir, a billionaire businessman who was picked as campaign chief after he organised the Asian Games hosted by Indonesia last year.

Speaking to a group of foreign journalists, Mr Thohir put the number of undecided voters at 12 to 15 per cent of the electorate in the world's third-biggest democracy.

Mr Thohir, who controls media and entertainment assets along with stakes in soccer and basketball clubs around the world, said many of the undecided were young and first-time voters.

Mr Joko was polling well in the most populous island of Java, and gaining ground in battleground provinces such as West Java and Banten where he struggled in 2014, Mr Thohir said.

"We're still confident in West Java we can win," he said, but added that the campaign was struggling in parts of Sumatra island, including West Sumatra and Aceh. 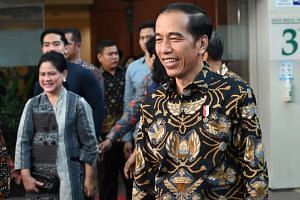 Mr Thohir said it was important not to underestimate the impact of fake news, often circulated on social media, and said the campaign had learned from the 2016 US elections that there was a need to push back in these situations.

"This is why... when there is fake news we need to make a strong statement," he said.

Indonesian election watchdogs have reported a spike in fake news during the campaign amid concerns about the impact in a country of avid social media users.

"Mr Jokowi is one of the victims in the last few years," said Mr Thohir, using the president's nickname.

Mr Joko has been falsely accused in rumours often spread online of being a Christian, having Chinese ancestry or being a communist.

All are sensitive accusations in the Muslim-majority country where the Communist Party is banned and suspicions linger over the wealth of its ethnic Chinese community and the influence of Beijing.

The two main presidential campaigns have promised to run a clean race.

Mr Thohir, 48, who has been touted as a potential future minister, said he would not seek a cabinet job if  Mr Joko won and looked forward "to going back to reality" as a businessman after the election.