JAKARTA - Indonesia's chief security minister Wiranto, who was stabbed on Thursday (Oct 10) by a militant,  has undergone surgery and is recovering.

Coordinating Maritime Affairs Minister Luhut Pandjaitan visited Mr Wiranto at the hospital and later told reporters he was in a stable condition.

Mr Wiranto, the Coordinating Minister of Political, Legal and Security Affairs, was alighting from a vehicle in Banten's Pandeglang regency at around 11.55am on Thursday when he was stabbed twice by the militant, who had pledged allegiance to the Islamic State of Iraq and Syria (ISIS).

The wife of the militant was also arrested after she attacked Major Dariyanto, a local police chief, stabbing him in the back with a pair of scissors.

Police told a news briefing on Friday that the couple had agreed beforehand that he would attack Mr Wiranto and she would target the police.

National police spokesman Dedi Prasetyo said the militants were only prompted to act just a few hours before the senior minister arrived at the location.

"We are indeed raising the alert but we won't overdo it," Mr Luhut told a media briefing earlier on Friday morning, adding that the government was evaluating its security measures.

The attack on Mr Wiranto comes ahead of the inauguration of President Joko Widodo on Oct 20, following his re-election in April. Foreign leaders including Singapore Prime Minister Lee Hsien Loong and Australian Prime Minister Scott Morrison are scheduled to attend the swearing-in of Mr Joko and Vice-President-elect Ma'ruf Amin at Parliament building.

When asked about security for the inauguration, Mr Luhut said: "The police and TNI (armed forces) have their standard operating procedure. Last night, I saw they had good contingency plans." 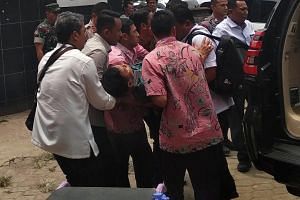 It is not uncommon in Indonesia for crowds or anyone to get close to prominent persons, ministers and even the president in spontaneous settings. Attacks on them, however, have been rare.

In March 2000, the chairman of Islamic-leaning National Awakening Party Matori Abdul Djalil was attacked near his home in South Jakarta and he suffered serious injuries to his head and arm.

The assailant disagreed with the way Mr Matori was leading the party, claiming that he had deviated from the right Islamic teachings.

Mr Wiranto was among four high-ranking officials targeted for assassination by suspects linked to riots in May following the release of the official results for the April election which Mr Joko won. Unhappy with the outcome, supporters of losing presidential candidate, Prabowo Subianto, went on the rampage. Police said militant groups were also involved in the violence. The other three officials targeted for assassination were Mr Luhut, National Intelligence Chief Budi Gunawan and presidential special staff Gories Mere.

On Thursday night, Mr Joko called on everyone to unite and fight against terrorism and radicalism and ordered the police and the country's intelligence agency to pursue all suspects involved in the attack on Mr Wiranto and their militant network.