JAKARTA (AFP) - An Indonesian student died on Thursday (Sept 26) as thousands hit the streets nationwide in a wave of opposition to a major overhaul of the country’s criminal code and a bid to weaken its anti-corruption agency, police said.

The death appeared to mark the first fatality in days of street battles across the South-east Asian country, which have left hundreds injured and sparked a call from Amnesty International to probe what it described as “massive police violence” against protesters.

The 21-year-old victim was rushed to hospital suffering from a chest wound and later died as riots erupted in Kendari city on Sulawesi island, where the local Parliament was torched, authorities said.

But police denied playing a role in the death, amid social media claims that the engineering student was shot.

“There was an injured student among the crowd. He was taken to the hospital and declared dead as doctors tried to save him. He had a wound on his right chest, but I cannot confirm what kind of injury it was,” South-east Sulawesi police spokesman Harry Golden Hart told Metro TV.

“None of our officers carried live bullets... or even rubber bullets,” he added.

The unrest was sparked by a proposed Bill that includes dozens of law changes – from criminalising pre-marital sex and restricting sales of contraceptives, to making it illegal to insult the president.

There has also been a backlash against a separate Bill that critics fear would dilute the powers of Indonesia’s corruption-fighting agency – known as the KPK – including its ability to wire-tap graft suspects.

The demonstrations across the archipelago are among the biggest since mass street protests in 1998 brought down the three-decade Suharto dictatorship.

Passage of the controversial changes has now been delayed. And, on Thursday, President Joko Widodo appeared to backtrack on plans to press ahead with the anti-corruption agency law, saying he would consider revising it.

Earlier Thursday, officials said more than 500 students had been arrested after a night of street battles in downtown Jakarta between molotov-cocktail throwing protesters and riot police who shot tear gas into the crowds. 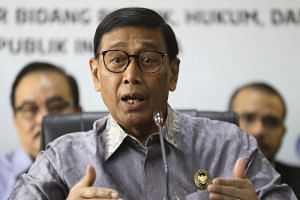 Meanwhile, a mass of students stormed and occupied the local parliament building in Sumatra’s Padang city Wednesday.  Most of the Jakarta students were set free, but some were still being held after police found knives and other sharp weapons in their possession, police said.

Students have issued a list of demands including scrapping some of the criminal-code changes, withdrawing troops from Indonesia’s restive Papua region, and halting forest fires in Sumatra and Borneo that have unleashed toxic haze across South-east Asia.

A vote on the criminal-code Bill was originally scheduled for Tuesday, but Mr Joko has called for a delay in passing the controversial changes that could affect millions of Indonesians, including gay and heterosexual couples who might face jail for having sex outside wedlock, or having an affair.

Updating Indonesia’s Dutch colonial-era criminal code has been debated for decades and appeared set to pass in 2018 before momentum fizzled out.

A renewed push this year, backed by Islamic groups, was met with a wave of criticism over what many saw as a draconian law that invaded the bedrooms of a nation with some 260 million people – the fourth most populous on Earth.