JAKARTA (DPA, REUTERS) - Thousands of students rallied in cities across Indonesia on Tuesday (Sept 24) against proposed changes to the criminal code that they say would threaten civil liberties.

Parliament had been due to pass the draft revisions to the penal code on Tuesday, but decided to postpone a vote on the Bill at the request of President Joko Widodo.

Mr Joko's request to postpone passage of the Bill came after street protests against the changes, which critics say could roll back democratic reforms.

Under the new Bill, consensual sex outside of marriage would be punishable by up to two years in prison, while a couple living together without being married could be jailed for up to six months.

Anyone who insults the president or vice-president could be handed a prison term of up to four-and-a-half years.

This was a crime under Indonesian law until 2006, but was decriminalised by the Constitutional Court after a legal challenge by citizens.

The revisions to the criminal code also include a four-year jail term for abortions in the absence of a medical emergency or rape, and a prison term for black magic.

Critics say the Bill violates free speech and discriminates against religious minorities, women and LGBT people. But Islamic groups, including Indonesia's biggest Muslim group, Nahdlatul Ulama, say the changes reflect "the character and the personality of the Indonesian people and the nation".

Tuesday's rallies followed an earlier on Monday, where thousands took to the streets of cities including Yogyakarta, Bandung and Malang on Java island, to denounce the Bill, student leaders said.

In Jakarta, students torched vehicles and road barriers made from plastic material in front of Parliament, local media reported, and police later sprayed water cannon to disperse the protesters.

Police fired tear gas to disperse the thousands of students gathered in Makassar.

Student protesters on Monday had torn down the gate of the Parliament building in Jakarta, but were stopped by riot police before they could force their way in. 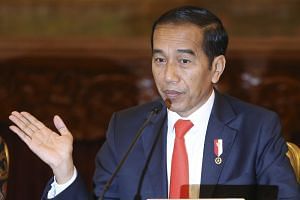 The planned revisions on the criminal code had spurred Australia to update its travel advice, warning citizens of risks they could face from extra-marital or gay sex should the law be passed.

Bali, a Hindu enclave in mostly Muslim Indonesia and the coutry's most important tourism destination, is especially popular with visitors from Australia, where one newspaper greeted the news last Friday with the headline: "Bali Sex Ban."

"I think it's crazy, because there's a lot of couples coming to Bali on, like, a romantic holiday, and they are not married, they might be just a boyfriend or girlfriend," said Sienna Scott, an Australian holidaying on the island.

Local officials said they hoped there might be changes to the Bill before it becomes law. "If possible, articles which are sensitive to our lives in Bali can be reviewed or eliminated," Bali deputy governor, Tjokorda Oka Artha Ardana Sukawati, said.