PETALING JAYA (THE STAR/ASIA NEWS NETWORK) - Rosmah Mansor will most likely be hauled to court again - this time over a RM1.25 billion (S$411.6 million) solar hybrid project for rural schools in Sarawak.

The wife of former Malaysian prime minister Najib Razak is expected to face several charges together with her former aide Rizal Mansor.

A Malaysian Anti-Corruption Commission (MACC) source said the duo would be charged by this week.

However, it is unclear what role Rosmah played in the deal or what charges would be brought against her. Those familiar with ongoing investigations are tight-lipped.

On Oct 4, 2018, Rosmah was charged with 17 counts of money laundering involving more than RM7 million.

The solar hybrid project courted controversy when Sarawak Report alleged in June that the contract was awarded to Bintulu-based company Jepak Holdings.

Asked if Najib and former education minister Mahdzir Khalid would also face charges, the source said: "Not yet". 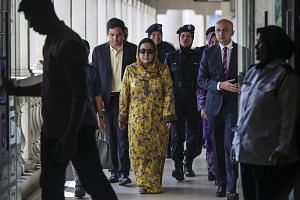 More than 99% of documents in Najib's wife Rosmah's case given to defence team: Prosecution

Malaysian Official #1 and his Madam in the spotlight

Mr Mahdzir was grilled for several hours by the MACC in October, also over the same project.

Najib was called in by the commission on Thursday to assist in investigations as a witness for several cases. One was related to the solar hybrid project.

Jepak Holdings was appointed at the end of 2016 for the supply of diesel, repair of generators and to provide solar hybrid systems for 369 rural schools in Sarawak.

To date, none of the schools has received the hybrid solar systems.

Rizal was arrested by the MACC in July 2018 following allegations that he solicited money from Jepak Holdings over the project. However, it is believed that the money did not change hands.

In June, the graft busters also arrested a company director, managing director and a lawyer over the controversial project.

The MACC began investigating the billion-ringgit project in April, a month before the general election.

Meanwhile, sources indicated that it would be a busy period for the MACC towards the year end, with quite a number of charges to be brought against members of the previous administration.

Among those speculated to be in the anti-graft agency's cross-hairs are former Federal Territories minister Tengku Adnan Tengku Mansor, who has been questioned 12 times over dubious land deals involving Kuala Lumpur City Hall (DBKL).

He has said that he had nothing to do with the approval of land deals between DBKL and private developers as he had handed the land back to Putrajaya.

A special task force was set up to probe the 97 transactions worth RM5.63 billion, involving 273.27ha of DBKL land.

As of now, 14 deals have been terminated while 15 other deals were renegotiated, resulting in an additional revenue of RM49 million.

Next up is said to be Baling MP and former Tabung Haji chairman Abdul Azeez Abdul Rahim.

The case against him is believed to be over allegations of bribery and money laundering in relation to government project kickbacks.

A former deputy minister is also expected to be charged over the embezzlement of Malaysian Communications and Multimedia Commission funds meant for the National Film Development Corporation.

The funds were supposedly for 1Malaysia Negaraku (a symbol of unity launched by Najib in August last year). These projects were never implemented.