She was charged under Section 4(1) of the Anti-Money Laundering and Anti-Terrorism Financing and Proceeds from Unlawful Activities Act 2001 (Amla) at Kuala Lumpur’s Sessions Court 9 for allegedly receiving RM7,097,750 in funds obtained from money-laundering activities.

It is the first time in Malaysia's history that the wife of a former prime minister has been charged.

The charges were read out before Sessions Court judge Azura Alwi, to which a calm and composed Rosmah said: “Saya mohon bicara (I claim trial).”

If convicted, she could face a jail term of up to 15 years and a fine five times the amount of the illicit activity, or RM5 million, or whichever is higher, for each of the charges.

After the court was adjourned on Thursday morning, Rosmah walked out of the courtroom before the judge even exited the dock. The case is fixed for mention on Nov 8.

The prosecution had suggested bail at RM10 million. The defence asked for a significantly lower bail of RM250,000.

"The purpose of bail is to secure attendance and should not be punitive," her lawyer Geethan Ram Vincent said.

"She is wife to former prime minister. She has been called by Malaysian Anti-Corruption Commission three times (on June 5, Sept 26 and Oct 3) and each time she has never failed to attend and gives her full cooperation," he said. 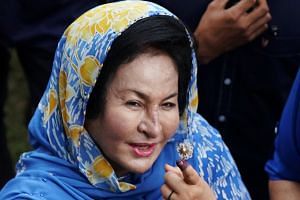 He added that Rosmah had no prior offences and this was her first time in court.

Rosmah brought her two passports to court and will comply with the prosecution request to surrender the passports, said the defence team.

Judge Azura also granted another condition, which is for the defence to refrain from contacting any witnesses or potential witnesses.

The 66-year-old wore an orange baju kurung when she arrived at Kuala Lumpur's Sessions Court 9 with a team of investigators at 8.28am. She looked cheerful and was smiling when she appeared at the building.

Her husband Najib appeared in court at around 8.40am on Thursday. The couple left the building at around 12.30pm.

He faces 32 charges involving criminal breach of trust, money laundering and abuse of power. These include charges related to RM42 million allegedly paid by SRC International, a former subsidiary of state fund 1Malaysia Development Berhad (1MDB), into his bank accounts.

One of his cases was due for case management on Thursday but has been postponed to Oct 31.

So far, Najib has been brought to court three times to face charges since July 4.

In the case involving Rosmah, investigators believe funds from SRC may have been used to purchase more than RM1 million worth of hormone-based anti-ageing products from the United States.

Rosmah was arrested on Wednesday after being quizzed by the Malaysian Anti-Corruption Commission (MACC) for nearly five hours at its headquarters in Putrajaya. She also spent the night in the agency's lock-up.

It was the third time she was interrogated by the MACC as part of its probe into SRC International, a former subsidiary of 1MDB.

The development fund, which was started by Najib in 2009 soon after he became prime minister, is at the centre of investigations by several countries for alleged misappropriation of billions of dollars, including the United States and Singapore.

Najib took to social media on the night of his wife's arrest, assuring her that God was listening “no matter how quiet the whisper from a sincere heart”.

“Don’t ever stop praying and keep holding on to your faith in God,” the former premier posted on Facebook.